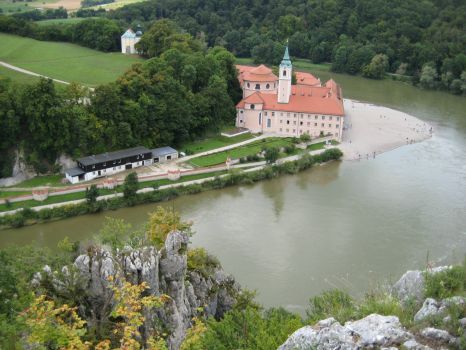 221 pieces (17×13)
Created by 4AausA
21 months ago
The abbey is situated on a peninsula in the Danube, on the so-called "Weltenburg Narrows" or the "Danube Gorge". The monastery, founded by monks of the Hiberno-Scottish mission in about 620, is held to be the oldest monastery in Bavaria. Besides the traditional duties of hospitality, the abbey has pastoral responsibility for two parishes. It is also active in farming and in adult education. It hosts conferences and lectures as well as concerts.
The abbey is open to the public, except for the part reserved for the monks.
Weltenburg Abbey brewery (Weltenburger Klosterbrauerei) is by some reckonings the oldest monastic brewery in the world, having been in operation since 1050, although the title is disputed by Weihenstephan Abbey.
(Source: Wikipedia)