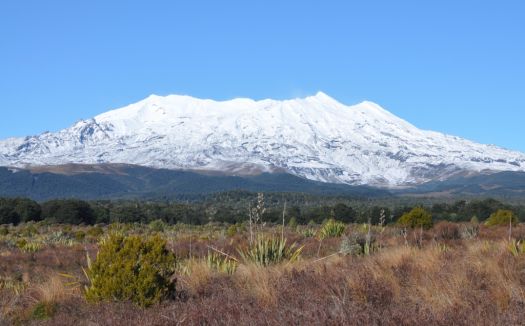 Mount Ruapehu, or just Ruapehu, is an active stratovolcano at the southern end of the Taupo Volcanic Zone in New Zealand. It is 23 kilometres (14 mi) northeast of Ohakune and 23 km (14 mi) southwest of the southern shore of Lake Taupo, within Tongariro National Park. The North Island's major ski resorts and only glaciers are on its slopes.
Ruapehu, the largest active volcano in New Zealand, is the highest point on the North Island and has three major peaks: Tahurangi (2,797 m), Te Heuheu (2,755 m) and Paretetaitonga (2,751 m). The deep, active crater is between the peaks and fills with Crater Lake between major eruptions.

Beautiful shot of this mt. thank you and I enjoyed putting it together. 9--7-17..7PM