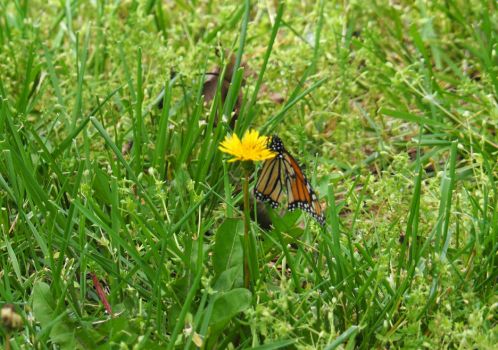 I tried to photograph this butterfly but it was busy going from dandelion to dandelion.
Created by canoekaw Published 27 May 2019
Why this advertisement?

LOL schutkleur, Our state insect is the "European Honey Bee" we do not have a state Butterfly. This just struck me as funny as so many Kansans are Republican and lean toward the Nationalist side of life and they picked the European Honey Bee as our state insect.
Our last Governor wanted to tear down a state-owned office building. My thought was because it was named after a very popular Democratic Governor. The building still stands and that governor is gone, thank goodness.

You learn something each day!
Thanks canoekaw. I never heard of a butterfly called Viceroy, but then : I don't know much about American butterflies :))
This is what I found : "It was long been thought to be a Batesian mimic of the monarch butterfly, but since the viceroy is also distasteful to predators, it is now considered a Müllerian mimic instead.
The viceroy was named the state butterfly of Kentucky in 1990."
You live in Kansas??

Thanks schutkleur, I was thinking Viceroy because it seemed a little small to be a Monarch butterfly.

You did very well canoekaw!! I know what it can be like to photograph a butterfly. It's mostly frustrating:))))
Is this a monarch butterfly? they're beautiful, I wish we had them here as well.

This shot is fine,Marilyn, a pretty butterfly on an equally pretty yellow flower. What's not to like? ☺☺☺☺