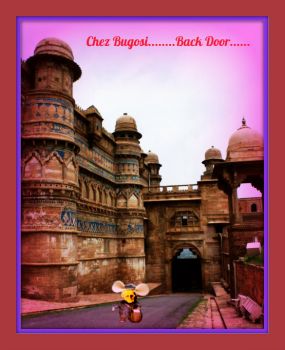 As many people have requested a detailed view of my rear entrance, I here present a photo of the back
entry to 'Chez Bugosi'..........
(I assume that this is what they were referring to)........
Created by lelabugosi Published 1 June 2013
Why this advertisement?

Speaking of the ides of June? Actually, the Ides are only on the 15th in the months of March, May, July, and October. On the other months it is on the 13th. Something my Latin teacher taught,
"October, March, July and May the Ides are on the 15th day."

From Wikipedia, "The Romans did not number days of a month sequentially from the first through the last day. Instead, they counted back from three fixed points of the month: the Nones (5th or 7th, depending on the length of the month), the Ides (13th or 15th), and the Kalends (1st) of the following month. The Ides occurred near the midpoint, on the 13th for most months, but on the 15th for March, May, July, and October. The Ides were supposed to be determined by the full moon, reflecting the lunar origin of the Roman calendar. On the earliest calendar, the Ides of March would have been the first full moon of the new year."

isn't that the good bacteria that eats the bad stuff? No wonder we are always at war with all that going on inside of us

"Healthy adults carry up to five pounds of bacteria in their digestive tracts alone ? roughly the weight of a brain."

Poor Halfred Itchcock. Reminds me of the story of the man who looked at the back end of a chicken and said...whatever comes out, let's eat it!

Haha, a good laugh to go to bed on! Night all

As an educated fellow I came at one time to a microbiology lab course in which the professor explained cheese. They take perfectly good milk and inject microbes into it. Microbes, which are also called bacteria, and which in simple terms are germs. The germs eat up the milk and poop it out, and that's cheese. Cheese (ugh!) is germ sh*t. And swiss cheese is germ sh*t with little collected-f*rt-pockets in it.

Alfred Hitchcock had a pathological loathing of eggs. They disgusted him beyond measure. He found out as a child that they were unborn chickens and was absolutely revolted. I had the same reaction when I learned how cheese comes into being. Sorry. (And I used to live in Wisconsin, America's cheese capital.)

that's all very odd, but then France, say no more

Thank you for your concern, Juneee and pd-whateveritis........My informants tell me that Orangeadsl has something to do with France.....maybe it is a plot of Napoleonic proportions.......

I was wondering, too, but I was sure that I had simply missed a comment you'd made where you explained why you wouldn't be here for a bit, and so I didn't say anything (I'm still thinking about that frog that looked like Venus in a clam shell to me, so I didn't want to sound like an even bigger idiot....sigh......). Anyway, I'm glad you're back!

Well actually I was wondering, I imagined you strolling out in the morning for a few steps in the Spanish sun and then it's lunch and siesta. potter round the garden in the afternoon, down the pub for a laugh at the holiday makers in the evening and before you know it another day gone. Glad Mrs B managed to sort things out, what would we have done had you abruptly vanished?

Fellow Bugosilanders.........In case any of you were wondering (doesn't seem so), the honoured name of Bugosi has been silenced during the past two days, by a mysterious world-power going by the name of Orangeadsl.........Our communications were suspended for so-called non-payment of some monthly fee.......
BUT FEAR NO MORE!........We are back, and we SHALL NOT BE SILENCED!.........(Mrs.Bugosi paid the fee to avoid the threat of war)..........

Bagpipe and pink airship! I won't get lost. Does your wife want to learn some samba steps, Pats? I can teach her if so.

great directions David, you can see bagpipe country from the top of our hill. I will put a big pink airship over the house so you can't miss it. Used to have a dog that wanted to kill bagpipes, thought there was an animal squalling in distress somewhere, personally I love them they stir up my Scottish ancestry. Not sure about tap dancing though I like the Irish kind. The ides of June are most benign so no worries there and hopefully no daggers.

Don't get your feet wet, Tati.

Sooooo.... Juneee was born on the Ides of June? Does that mean anything?

Bagpipes. My wife's two ambitions in life were to learn to tap-dance and play the bagpipes (not necessarily all at once). Fortunately she got the chance to take tap-dancing lessons first! Why fortunately? Because she couldn't tap-dance a single step, so she quit those lessons and gave up on the bagpipes at the same time!!! Hallelujah, brother!!!

Bagpipes. Ok. I get it Mr Numbers!

Tati, just drive northwest, then north, then northeast until you hit icy bits. Then drive onto a biggish icy bit and float along until you hear bagpipes. Then head south. All done.

Right you are Tati, please bring chocolates. Maybe you could find a chairycopter. Just had a look at the map, didn't realize how far south you are. Wow Noggin could do with widening his horizons

June 15th - 77th June's anniversary. if you say me there'll be ballons. I'll pack my things right now. It's a long journey by bus to England!
I never bother about my age too, but I won't tell.

never bothered me, and on the 15th June I will be 77 you are all invited to my birthday bash.

***At least, not since I got a black eye from octomom, that one time!

I was 35 and Clint Eastwood will do for me thanks

I used to be a fan until he made an ass out of himself talking to an empty chair.

In 1971 (how old were you in 1971?) Life Magazine's cover announced "The world's favorite movie star is - no kidding - CLINT EASTWOOD" and had a picture of him smiling sweetly. Sorry Juneee, I got nuthin' else.

no GgLady no Hanne no fun where is everybody else, must be the weather

West Point, a lot of soldiers have passed through those portals

Magnificent and really old 'rear entrance' a bit large because the numerous things that must pass through it I suppose.

Ahh, GGL, horse rescuer, dog rescuer and now nurse to a daughter in trouble. You're a fine person, so ATYPICAL of SOME of our fellow Bugosilanders.

You're in Texas, and you're going to a destination in Texas, and it's going to take you 7 or 8 hours to drive there? Yeah, I used to have a car like that too! (ba-da-bump!)

Ah, P_Squirty...I shall miss you and you "dignity" this next week....and all of you other Bugosiland_ers...I shall be in Ft. Worth helping my daughter-in-law who just had hip surgery...I'll be leaving early tomorrow morning as it is a 7-8 hour drive, so I won't be able to check in before I go.

lela_bug....if you have any grand tours of your magnificent manse, please save a place for me when I return.....

AHA, seventeenth gerdulator, you've got it! So my polite term "rear exit" is true after all.......

He was a trick camel! They told me it was the only way he'd carry me, and then only for a little way, and then I'd have to do it again! I HAD TOOOOOOOO! It was disgusting, but I had no choice!

And then, out in the middle of nowhere, where I WOULD DIE without transportation all of a sudden that wasn't GOOD ENOUGH for him any more. Oh, no, he shook his head and just stood there pursing those awful, fleshy, drooly lips with a wild look in his eyes. I HAD TOOOOOOOO!!!!!! I WOULD HAVE DIED!!!!!

And now you're threatening to fill in the sordid details for those in Bugosiland who can't imagine my shame?!?!? Oh, you rotten, rotten woman..............

Hellooee everybodeee!
As you can see, we're back in Bonga-Bonga........Mr.Le-Squirt, shall I tell everyone what I saw you doing to that camel in the desert?.........

As a polite man, in all politeness I must politely ask that we use the polite term, "rear exit."

OMG it he has a Rec room at the back too just imagine the traffic in and out of there, hopefully there is a cook and a butler around to give him a helping hand. it's a wonder he has time for the postal service, which is probably why I am still awaiting my sash from 18 months ago.

is it the Tradesman's entrance, boom.boom!

Well, certainly better this "rear entrance" than the alternative.....