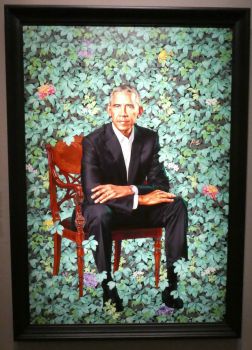 Created by Elam01 Published 23 June 2018
Why this advertisement?

Thanks you guys for great comments, pats,youn, and linda

This man worked hard every day in office to harm, damage, hurt, embarrass and destroy America. He cheated us out of our Cost of Living increases for eight long years. The two happiest days of his administration were when he got the United States downgraded from an AAA credit rating for the first time in history, and the day he brought ruin to American health care with the passage of Obamacare. For his parting shot he commissioned these disgraceful portraits of himself and the worst First Lady we've ever had. However, he is now learning that America is much stronger and more robust than he imagined and under our Republican leadership we are steadily rebuilding our great nation.

Well said reillycaf, we have gone from the best of the best to the worst of the worst.

He was truly intelligent, competent, dignified, fair, for the people. He respected the position he was elected into. He was very much a United States President. He showed his true self when he was criticized, but held up his composure, with dignity. He showed real emotion when tragedy struck. He gave his all. A real feel for his country. A true man, a true president. God bless him and pray for us.

Thank you so much for your comments.

I just googled and I am right that this is the last official portrait.
Also you will find a close up of the President's painting and it definitely shows better the light effect...definitely not painted white....Why on earth would anyone even conceive the thought of him or the artist trying to make himself white.

Fruttel 1. I think this was the final pictures done at the end of his presidency...remember, the one of Mrs. Obama had her sitting with the skirt if her dress spread out. Hers had been done by a wonderful black female artist. You are right about the light. The artist of this painting as with a great many artists, is using light to focus on President Obama, to bring him forward out of the background. This is my favorite of the two pieces of art. They were done by different artists. The President and First Lady each chose their own artist. Google last official paintings of the Obamas. Maybe that will bring them up.

I pretty sure that is the effect of the lightfall, papawalrus.

I won't get into politics on Jigidi, I'll save that for Twitter.

So regarding the puzzle: Did YOU paint it, Elam? And if not, do you have an idea who did?
I liked solving it, thanks for sharing. (LOL, strangely enough it was a lot easier to solve than I expected, I even got myself on the leaderboard …. for now. ;) )

Trump has to clean up the mess this idiot left for him. America has become a leftist globalist nightmare. Anyone that uses logic or truth is labelled a nazi, so no debate is possible. Conservatives being harassed, threatened, their lives destroyed. This is war, Obama's team started it. leftists want a war, they will get one, and they will lose, hard.

Amen to your choice of adjectives, scrabbles!!

This is a President - who is a class act.
Articulate, thoughtful, brilliant, selfless and HONEST.

Dear God we need you now.