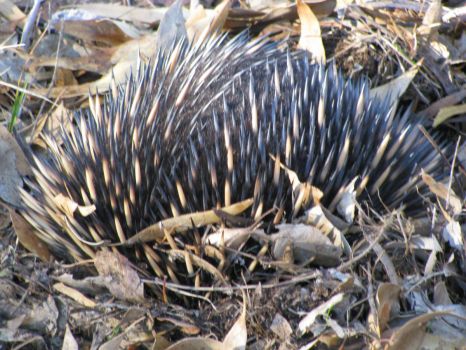 Created by lavenderblue Published 25 September 2017
Why this advertisement?

Not easy but the echidna is such a charming, shy creature who could resist?
Thanks for sharing.

I live in the more bushy outer north eastern suburbs of Melbourne. But I've been here for 15 years, and it's the first time I've been lucky enough to be visited by one. I keep hoping he (?) will come back though! And that's a lovely part of the world where you took the photo! (❛ᴗ❛)

I was in the bush between Daylesford and Castlemaine when I took that photo , but have never been lucky enough to see one in my garden.

Aren't they funny when they do this? I had one visit my garden last summer, and every time it spotted me, it would push its beak into the soil, and hunker down . But they seem to have the memory of a goldfish - as two seconds later, it would be up and about again! (❛ᴗ❛)