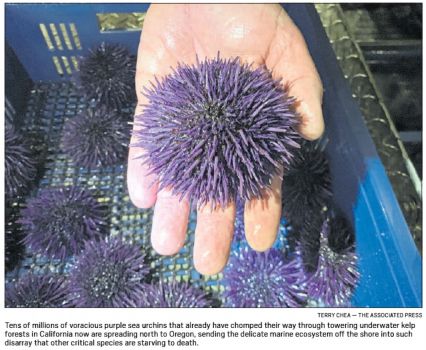 I always thought sea urchins were just lumps that floated around in the sea. How I've learned! Thanks, Plum. :-)

Bill, an excellent video! Thanks so much. :-)

Sunflower sea stars are a hardy group..
I can believe the temp could deter breeding..
Bet the people at the Monterey Bay Aquarium could breed or show how to breed these :-)

Isn't it amazing? And it all makes perfect sense. I was so impressed that they were able to pull that story together over the decades!

@Bill_I_Am - thanks for the video on The Serengeti Rules. It opens my mind.

Thanks, Plum. PKH has it right. Balance. Sea urchins are out of control because their predator has been wiped out, probably by humans. This outstanding Nature program explains the whole concept beautifully. I can't recommend it highly enough.

A glimmer of hope? Thanks, Returner.

"....World population will...continue to grow in the 21st century, but at a much slower rate compared to the recent past."

Thanks, PKH and Returner. You are both right. I wonder by what percentage the human population increased in five years...?

Environmental consequences seem to turn up every day now, often from something I'd never heard of, like purple sea urchins -- a 10,000% increase in their population in five years.

It's all about balance, isn't it. When something in the environment goes wonky, the effect ripples throughout.
A very interesting and eye opening article, Plumpossum. Thank you.