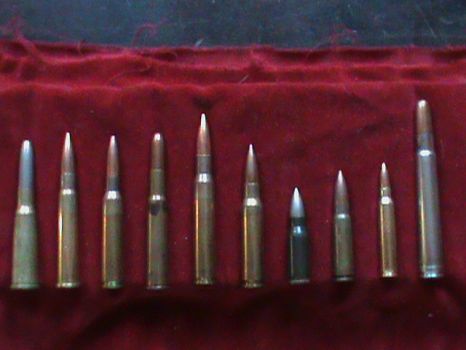 Cartridges from the world at large, but illustrative of the 'evolution' of the device. Some rather obscure.
Created by OldManMontgomery Published 20 September 2017

My round will peak out of a large hand of a man.
I will measure it and try to remember to take a nice photo to share.

The fifth round is a U. S. .30-06 Springfield. Developed in 1906 (go figure) it is essentially a robust (but not ultimate) rifle round. It has been inadequate for any sort of aircraft use since the First World War.

It left first line U. S. service in about 1954 or so. It is still popular with hunters, as it will do for most anything in North America. Never officially used by Russia or Soviet Union, but might be made commercially to this day. The U. S. imports a fair amount of ammunition for sport from Russia.

Not shown, but possible is the .50 Browning Machine Gun (BMG) round. It looks just like the two middle rounds shown (proportions are the same, more or less) except for size. If one held a .30-06 round in the palm of one's hand, it would probably 'peek' out one side or the other. A .50 BMG is in clear view on both side of one's hand.

I'm going to have to start putting a ruler in this sort of picture.

Then perhaps the round that I own is the fifth from the left.

Miss Joan, the sixth from the left is a U. S. 7.62x51mm NATO round. It is a rifle round, also used in medium machine guns. To my knowledge, it has never been used by or against aircraft. At least officially, the Russians - Soviets - never manufactured the round for military use, nor did they have any 'official' arms chambered for this round.

It is commercially known as the .308 Winchester and popularly used for target (formal) shooting and hunting game deer-sized or larger and smaller than large bears.

The sixth from the left looks like one I own. Mine is a Russian, per the markings on the end, and possibly anti aircraft.
I will have to measure it when I get home and tell you the length and the markings.

The Kurz was the forerunner of the 7.62x39mm. The Soviets claim vice versa. Also called 7.92x33mm. The Lebel is a strange shape. The very first smokeless powder cartridge and designed by black powder designers.

I just remember the strange shape of the Lebel and had to look it up to spell it correctly. I am not familiar with the 7.92 Kurz. I will do some research. Thanks.

Sucop, I must admit I've forgotten all of them. But you hit most of them.

Third from the left is a .30 Government known also as .30-40 Krag (if 8mm Mauser it would be as long in the case as the 7mm Mauser) the one you passed on is the 7.92 Kurz, the 'assault rifle' round the NAZI regime developed in late 1944. All the rest are as you call them. I thought the Lebel would be the hard one to identify.

Racoon, there are some of my favorites missing as well. However, the collection is of 'transitional' cartridges; moving from one form or theory of operation to another. Most of these show the first and second transitions to smokeless powder from black powder. A couple of them are 'intermediate' type rounds.

I think my favorite is missing.
The one on the left in this picture: