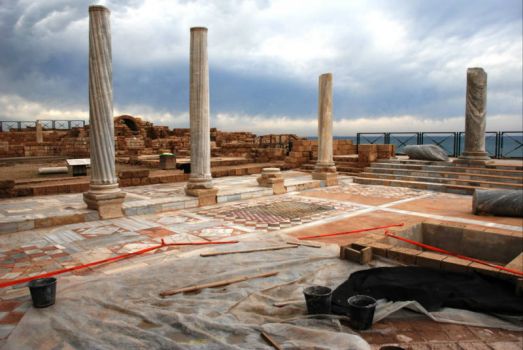 Caesarea was a port city, founded between the years 25-13 BCE. It served as the capital of Israel in Roman times and was named after the Roman Emperor/Caesar Augustus. Today, the Old City is a National Park and next to it is the modern neighborhood of Caesarea.

The first settlement in this area was at the end of the Persian era around 350 BCE with a small Phoenician dock.
In 90 BCE the site was conquered by Alexander Yanai (Alexander Jannaeus), king of the Jewish Hasmonean dynasty who annexed it to the Judea kingdom of the Hasmoneans.
With the conquest of Israel by Rome in 63 BCE, Pompey annexed Caesarea to the province of Syria.
In 31 BCE, Gaius Octavius (later named Augustus Caesar) gave the city, along with the coastal region of Israel to King Herod, who ruled Israel under the patronage of Rome.
King Herod built a large port city and named it Caesarea, after his patron. The city was built as a non-Jewish one, with all sort of playgrounds, an amphitheater, a theater (now renovated), bathhouses and idolatrous temples.
Herod also built a huge port, described by the Jewish historian Flavius Josephus as greater than that of Piraeus, Greece.
After Herod's death in 4 BCE, the importance of Caesarea had increased and in the year 6 CE it became the seat of the Judean Roman commissioners. The city had a mixed population, but her character was distinctly Hellenistic,
so Jewish residents had often been harassed by their gentile neighbors.
During the rule of the Roman procurator Gessius Florus in 66 CE, a chain of events near the synagogue broke bloody riots between Jews and gentiles which gave the signal for the beginning of the Great Jewish Revolt against Rome.
Vespasian, (9-79 CE), who suppressed the revolt of the Jews against the Romans (with his son Titus who destroyed the Jewish Temple in Jerusalem and exiled many of the Jews) raised the status of city to a colony.
After the suppression of the Bar Kokhba revolt against the Romans (132-136 CE) the Romans changed the name of the province of Israel from “Judea” into "Syria Palestina", renaming the country after the Philistine people, who were already extinct at that time, in order to cut any ties between the people of Israel and the land of Israel.
Later in Roman period, the Jewish community in Caesarea developed again and it became an important Jewish center.
During the Byzantine period, Caesarea was the metropolis of "Palestina Prima" and an important Christian center and reach a population of 100,000.
Caesarea was conquered in the 7th century by the Muslims along with all the land of Israel and was abandoned.
At the end of the 12th century, the control over Caesarea moved on and off between the Christian Crusaders and the Muslim forces of Saladin.
In 1265, Caesarea was conquered by the Muslim Mamluks and was (guess what?...) destroyed along with the other coastal towns in Israel, never to be rebuilt again.
In 1882, a group European Muslim Bosniaks of Slavic origin (from Bosnia/Yugoslavia) settled on the ruins of Caesarea and built themselves houses using the foundations of the destroyed ancients monuments, taking hewn stones from the destroyed Herod's palace and from other buildings including the Crusader church for their construction. (nan!!! Are you OK? LOL)
The minaret that can be seen today in old Caesarea is of the Bosniaks’ mosque that wasn’t destroyed by us. (unlike the Cusaders/Muslims/Mamluks who destroyed everything that was before them). So of course, this mosque has nothing to do with the Arabs in Israel who call themselves “Palestinians”.
Although the Bosniaks were in good relations with their neighboring Jews, the small village was taken by the Israeli forces in Feb.1948 during our war of independence. Its inhabitants moved to several Arab villages in the Galilee, Israel.
Created by Elin Published 11 January 2016