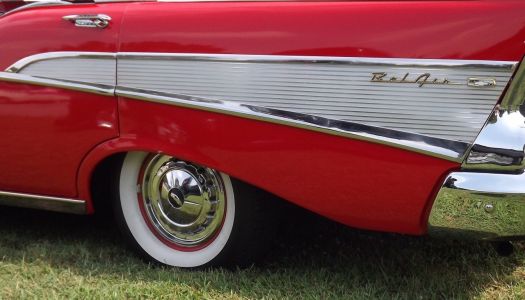 Bel Air
Created by Teagardener Published 7 January 2021
Why this advertisement?

Beautiful Bel Air. The cars from that era had so much style.

Hello @Kreutt, my apology, I looked thru my classic car pics and only found 1 of the Nomad and it’s only of the interior rear. A photo of the name Nomad and car image in the blue carpet. Kinda cool, but probably not interesting enough for a puzzle. I’m hoping one of the other puzzle users (vintage car fans) will post a puzzle of a Nomad :))

Good evening Wilma :) I think you’re talking about posting a photo puzzle of the Nomad? Goodness, if I can figure it out . . . then it’s not too complicated :))
But, in the morning I’ll post my Nomad photo, especially for you! Your brother’s was a light blue, but mine is a more aqua, bright blue, but pretty close. Let’s see if we can guess the year ...
-Betty Rubble

I don't have that talent yet. Call me Wilma Flintstone.

That sounds like it was a lot of FUN Kreutt !! Do you have a photo of it?

Hi, he found it in California after getting out of the navy and drove it home to upstate NY. We had a summer full camping and day trips. It was the wagon.

Hi Kreutt, how ‘bout that, I was looking at photos of a blue Nomad a few hours ago :) They were really unique !!

Wookie :) I worked with international opera singers, conductors, opera directors, solo musicians, producers, composers .... I’m delighted your late husband was with the Australian Opera Co., that’s awesome! Glove box is in the interior and the trunk is what we use for ‘boot’ :)

Teagardener, International Symphony Conductors? very interesting, did you ever get to come to Australia? My late husband was a Bass singer in the chorus of the Australian Opera Co. sadly he passed away going on nineteen years, Love the Opera. Nice to meet you Just a thought maybe the glove box is called a trunk?

. . In general Wookie, Google says the British use ‘glove compartment’, but ‘glovebox’ is becoming more acceptable :)

In England, it's a glove compartment

Hi Wookie, I shouldn’t have asked! For years I worked with international symphony conductors, sometimes we talked about the differences in British and American English. So I noticed the word ‘colour’ and . . I had a Mini Cooper that of course had a ‘boot’ :) Australians have beautiful accents !! About the glove box . . hmm, I used to know, I’ll try to remember :) Very nice to meet you here!

Teagardener, No I am Australian, it just as I thought it was an American car, and going by what I have heard them say (in the movies) they refer to the boot as trunk, and for the life of me I cannot think of what they call the glove box? any clues there?

Wookie, I’m smiling . . there’s 2 clues in your text that you might have a British background :)

No need to buy a camper van, there would be enough room in the boot/trunk to sleep a few bodies! Love the colour, & the car

my pleasure, Teagardner! Thnak you!