A planter gently floating by... 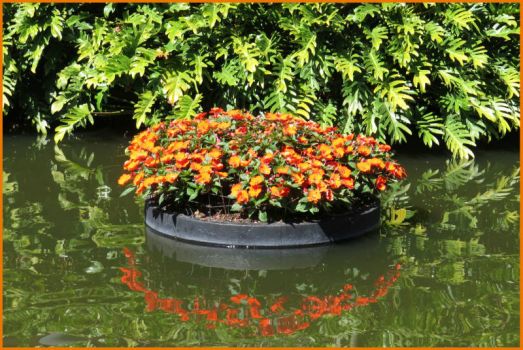 There were 4 or 5 of these unusual planters gently floating around a small pond!

Thanks Barb, Lunie, Patti, Jana, Lyndee, Gracie, snooker ( he should too!!! ) and Dave!!! The pond was small enough so that the planter could be hosed/watered from the bank - and therefore not get wet feet from the pond water:))) Thanks everyone:)))

This is a great idea! I'll have to think about this! Thanks Robyn!!

Maybe warb will put some of these in his lake. Would love to have something like this.

What a great idea. Funny what some people think of.

What a cool idea!

Terrific photo rob! The reflection ...everything is just perfect! I love it...tfs.

I love that idea of a floating planter :) Very interesting and pretty...thank you Rob :)

I thought so too chookie - thanks:)))

Someone clever came up with this idea - what a beautiful display. Thanks rob :))

I thought so too Lorna - thanks!!

What a lovely and unusual idea! Looks great and the reflections are an added bonus.

Thanks Beekay - I liked it too!!

I think the container was completely sealed jlou - as a couple of them were floating freely around the pond. The gardeners would probably water the plants on a regular basis - and the planter removed once the special Spring Display was finished. Thanks for commenting:)))

Lovely image, however, eventually if this plant isn't removed,
it will become water logged thru seepage in the bottom of the
container, and the roots will rot. Now, if they have set these pots
in the pond, they have taken care of that problem.

What a clever idea! And a great reflection in the water too

I don't think it's a water plant Shirley - as the black container was floating, so therefore sealed!!..and the plants and soil didn't look really wet! Thanks!

I've got no idea what the plants are Janet - I couldn't get close enough:))) and I didn't think to zoom right in for a close-up!!! Silly me:))) But I did like the whole idea of them! The planter was about 1 metre across.Thanks!!

Are they Balsams, Rob? Couldn't quite make them out. Rather unusual idea, but they look fabulous. Thanks and hugs, Janet

Obvious a water plant, it's not familiar to me, very pretty though, and a great idea, Thanks, Rob.

Thanks els2 - it was a new & different idea I thought!