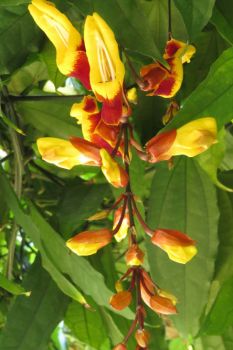 They sure are different Beekay - but I like them both!! I think you've got yours in exactly the right place - after reading Janet's tale:)))) Thanks!!!

Hard to believe the two plants are in the same family! We grow Black eye susan vine in hanging pots and they are very pretty (an annual Janet ;-)). This plant Rob is very lovely and so is your photo! TFS!!

That flower in Warbs' link, is the Black Eyed Susan I know, Rob and Warbs. Many years ago we bought a house that had belonged to an old lady and the garden was smothered with this vine. It took us ages to get it all off, and underneath there were roses, beautiful bulbs, Azaleas etc. It was like a treasure trove, that had all been hidden! Thanks for the memory, Warbs. Thanks Rob. hugs, janet

Gosh - Thumbergia's sure come in different varieties Dave - I really like the Black-eyes Susan vine too. Thanks for the link:)))

Black eyed Susan Vine is what I was thinking of. Yours and it have photos here..

Very cool!! That top flower looks like a lady slipper too! Thumbergia rings a bell but I can't quite place it....

I have seen this plant growing in Townsville Rob. It got huge! Maybe not quite so vigorous in the slightly cooler climate. It's an amazing looking flower, thanks and hugs, janet.

They hung down on long bunches a bit like Wisteria Barb - only nicer!! Thanks!!

Thanks chookie - it was really nice!!

Simply lovely but it's new to me too, rob!

I do not know this plant and it is pretty with funny little blooms...thanks Rob!

Thanks Shirley - it was for me too!!

A first time for me, Rob, very pretty, Thank you.