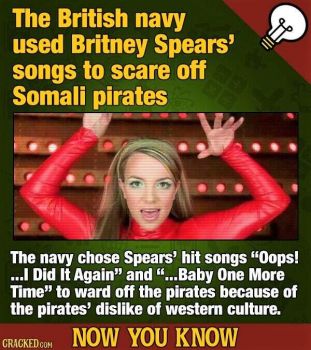 "Just because you listen to a lot of music doesn't mean you know much about it. Here are some fun music facts to bring up the next time your favorite pop star is on the radio."
Created by Mischka Published 27 July 2021

P.S. I really don't follow Britney's story. But I am a subscriber to LegalEagle's channel, where attorney Devin... going blank on his last name... speaks very entertainingly about law.

* He reviews "legal movies," and judges how realistic they are. For example, "Real Lawyer Reacts to My Cousin Vinny (The Most Accurate Legal Comedy?)"

* All kinds of corporate laws, from sports to entertainment contracts.

Most of his vlogs are circa 15-35 mins., though he does a good overview at each beginning and a good summary at each end, so if you don't want to get mired in the legal stuff ("Code 24Z.999 (a).EightSquirrel (7) SDNY-minus-Celsius"), you can happily avoid notes for law school.

I don't know Britney's music at all, but as a woman I feel a lot of sympathy for her. She has earned $60 million on her own talent and created jobs for countless creative people, but her father holds her under his own version of sharia law. She wants to have another child, which is her constitutional right, but under the conservatorship she can't even have the IUD removed, and at 39 her best childbearing years are over. Treating her like a backward child is absolutely unconstitutional, especially now that her partying days are also behind her.

I don't really follow her story, but her father's greed makes me so furious that I think he should be in jail.

@KittyCounselor - Margie, I agree entirely with you.

@Watchman - Maria, now that she's fighting the conservatorship, I'd say she HAS grown up. She is surrounded by users and I hope that she has a good friend who cares about her. I believe Kevin Federline might be one now that their custody tantrums are over. She needs a friend more than she needs a thousand paid caretakers.

I won't go on and on, but I think she should be an icon for women's rights, not a caricature.

She needs to be set free to live her life, she will either grow up and be an adult or be forever trying to relive her childhood, like Michael Jackson, Lindsey Lohan, and (even Miley Cyrus) is still finding her way. Just hope the guy she is with isn't another user.

I think the whole Britney flap is crazy!

Face it people...Britney IS a bit scary.

Just read that Britney Spears' father has been paying himself $16,000/month all these years. What a meal ticket she's been. 'Bout time (way past time) for him to get a real job. So sad for her.

Some may require hot sauce to get that gamey taste out of your mouth.

I saw a stone carving that said T-Rexes loved sketch artists. With ketchup.

I DID employ a rather excellent sketch artistl

Or play them to her father. He's the villain here.

[sigh] The good old days with sloths vs. T-Rexes! If only you'd had cameras!

Maybe she should threaten to play them in the courtroom?

You'll have to pack a lunch and plod on over to the WWE. I believe some relatives of the TRex perform there.

Back during the T-Rex, vs Giant Mega Sloth battles, my parents and I would bring a lunch, and watch the matches all day. I would like to do the same with my kids and grandkids, but alas, the T-Rex is no more.

I thought Baby Shark was the go-to song for scaring off anyone with a semblance of sanity. @msbonne - you must have a superior moisturizer; you're much older than you look.

Yes, we used to do the same thing against Blackbeard.