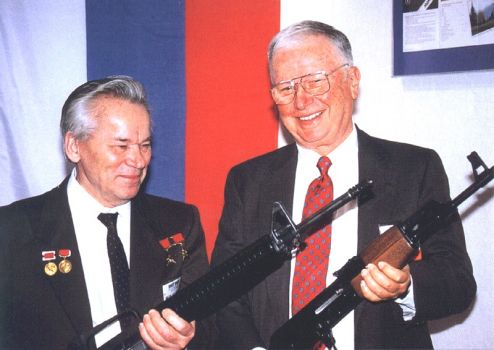 Thanks for letting me know about this, Pat.
Have a nice evening...Bernadette @patsquire

I'm happy to say that I knew Gene Stoner and I met Mikhail Kalashnikov.

However, I am UNHAPPY to say that I stupidly passed up an invitation to attend this historic meeting, when these two giants of the modern age met for one of the only times in Washington, DC. I'm still kicking myself.

Kalashnikov was a citizen of Communist Russia, while Stoner was a citizen of the capitalist United States. Why has the Soviet Union collapsed and dissolved, while the U.S. stays strong and vibrant? Perhaps this paragraph from the New York Times, written in Stoner's obituary, serves to illustrate one reason:

"Their life styles were not comparable. Mr. Stoner's inventions made him a millionaire. He was also a pilot with his own plane. Mr. Kalashnikov, a tiny white-haired man three years Mr. Stoner's senior lived on a state pension in a small apartment east of Moscow. 'Stoner has his own aircraft.' he once said, 'I can't even afford my own plane ticket.' "