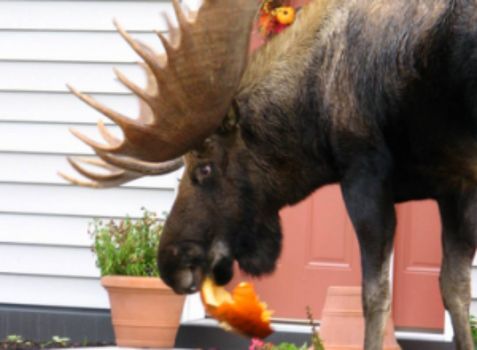 Created by VermontMeow Published 29 October 2012
Why this advertisement?

I don't know who's photo this is or whether it is photoshopped. It seems quite possible this was taken from a neighboring house. I think it is real. We have moose come right up to our house and garden. They haven't eaten any Jack O'Lanterns - yet. Rosewood, I don't think anyone is going to tell him he can't have a pumpkin - or anything else he wants or wants to do.

So who's gonna tell him he can't have the pumpkin!?!

Sometimes you can tell a picture has been photoshopped when some of the components seem to "float" instead of being firmly planted. People are getting better at photoshopping, tho, and very often it is almost impossible to tell a fake from a genuine photo.

Great picture, Cheryl. Is this a real picture? If so, what was the photographer doing that close to a moose? I know all kinds of situations can be made to look real with photo shop and other programs but I don';t know how to tell what's real and what isn't. It's a great picture whichever it is. I'm just curious. Thanks. This is great,.