Cabela, the dog who was shot ~ I *knew* there was more to this story than met the eye 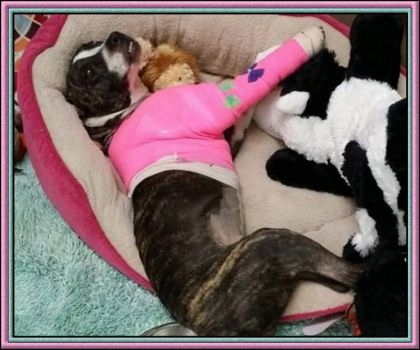 TAMPA — Two teenagers have been arrested and charged with strapping a dog to railroad tracks in Sulphur Springs a week ago, shooting her and leaving her for dead. Police said the mixed breed they have named Cabella had been purchased for dog fighting. They said during a news conference Wednesday night that she was shot after her new owners determined she was a poor fighter. Natwan Callaway and Bobby Hollinger, both 17 and from Tampa, face an aggravated animal cruelty charge. Callaway, the suspected shooter, faces an armed trespassing charge and Hollinger faces a trespassing charge for being on CSX property. Police said more arrests and charges are likely. Investigators say Hollinger initially threw Cabella in the woods and shot at her. But Cabella ran home and sat on the porch, injured. So the teens caught and walked her back to the railroad tracks, tied her down and shot her again. Police said they were tipped off to a surveillance video that shows Callaway, Hollinger and two adults walking Cabella to the railroad tracks. This was after the initial shooting, police said. They used the video to identify one of the suspects and received confessions from Callaway and Hollinger, police said. Stories of the dog's shooting spread internationally and Tampa police received thousands of comments on their social media pages from animal lovers expressing outrage over the incident. Police said they, too, were emotionally affected. "Nothing really prepares you to see a helpless animal tied so tight to a railroad track that she is literally pinned down," said Sgt. Rich Mills, a 20-year veteran of the Tampa Police Department and military veteran who was one of the first to come to Cabella's aid. "It touched me." Mills said he and his squad were one of three units to initially respond to shots fired along the railroad tracks south of Busch Boulevard. But what he saw at the end of E Eskimo Drive disturbed him: Cabella, with gunshot wounds in the neck and right shoulder, belted down to the tracks like cargo tied down on a vehicle. Lying in a pool of blood, Cabella neither whimpered nor barked, Mills said. He described the situation as "eerie." Mills said his officers fashioned a makeshift muzzle, placed it around the pit bull mix's mouth and carried her to a squad car. Officers called CSX to halt possible trains and rushed the dog to emergency care. Those at the Tampa Bay Veterinary Emergency Service clinic feared Cabella might lose a leg, but surgery proved successful, and she emerged with all limbs intact, a rod in the injured leg. The clinic was flooded with donations, according to employees there. One woman, Selena Chiavatti, 33, drove from Orlando to donate a pink bed, toys and treats for the recovering dog. "It's just a lot," she said, tearing up. "That dog is sitting there in terror and no one is coming. … It drives me crazy that people would do this."

Good for you, Marco, writing to your legislators.

The laws need to be tougher, and we all need to speak up to protect animals. They depend on us. I write to my legislators all the time, it does work.

Two more arrests were made, and I now have photos. It's too early yet for me to post my puzzles, but here it is still in private mode:

Buying them the guns.

Thanks for your insights. I can't possibly add anything further to this conversation, as you've all said it so well. These boys are the future Michael Vicks of the animal world. I have to wonder ~ where are the parents in all this?

Heidi -- I understand your frustration and I agree. There are laws about this everywhere; it's the people who "enjoy" these bloody, senseless actions that need to change. The United States seems to have a very hard time accepting that you cannot legislate morals. Prohibition was a case in point. It added to the "glamour" of alcohol, and is that period is now looked on with a smile and shrug. I don't know what the answer is when kids are raised to think that gore is perfectly normal with no consequences.

There are laws against dog fighting, but they're not enforced. And that is wrong on many levels. In Kentucky, a lot of the elected officials, including law enforcement officials, are involved in dog fighting and rooster fights, and refuse to allow the laws to be enforced. People in general are no damn good. That's why I prefer animals.

I can only too easily believe that these 2 young thugs did this -- children are being raised in a violence and death atmosphere anymore. Yes, this should be stopped. One way is look further back in the story and stop the brutal and barbaric "sport" of dog fighting. If there was no demand for it, and no money to be made from it, the practice would die out.

It is positively UNBELIEVABLE that people like this exist !!!!
There is a site: "THE ANIMAL RESCUE SITE" I have been using it for a few years.
There is no money involved. You just click on it (there is also free clicks for mamograms, alzheimers etc. The SPONSORS donate the money for caring for abandoned animals, vet care, investigations for
animal abuse.
Near the top corner you can click to receive a reminder daily to click for this poor little animals.

You have to wonder what kind of world we have when in 17 short years two young men could inflict something like this on a poor dog, shame on them and their families. Somebody raised these 2. Just very hard reading this.

what they did was wrong and I wish there was stronger laws to punish these people. some of them only get a slap on the wrist and a small fine. they should get the same punishment as they would if it was a child. if I was the judge I would put them in jail and throw away the keys

What a horrible story...That poor dog.

Thanks for the update. I find it unfathomable that anyone can do this to any animal and hope the police also go after the owners. This pooch's life can only get better with so many people caring.

This is heartbreaking, how anyone could hurt any animal, not once but time and time again disturbs me. They must be scum, I hope they throw the key away. Thank you for sharing this story octomom. 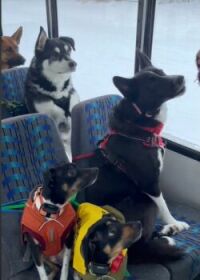