"The Legacy of John F. Kennedy" 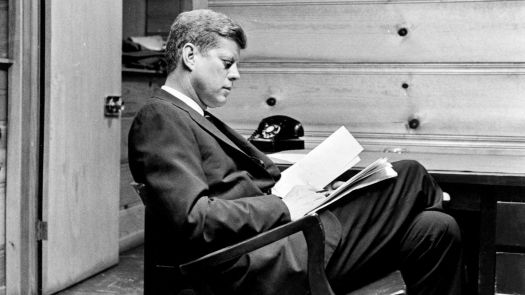 Photo by The Associated Press

"President Kennedy spent less than three years in the White House. His first year was a disaster, as he himself acknowledged. The Bay of Pigs invasion of Communist Cuba was only the first in a series of failed efforts to undo Fidel Castro’s regime. His 1961 summit meeting in Vienna with the Soviet leader Nikita Khrushchev was a humiliating experience. Most of his legislative proposals died on Capitol Hill.

"Yet he was also responsible for some extraordinary accomplishments. The most important, and most famous, was his adept management of the Cuban missile crisis in 1962, widely considered the most perilous moment since World War II. Most of his military advisers—and they were not alone—believed the United States should bomb the missile pads that the Soviet Union was stationing in Cuba. Kennedy, aware of the danger of escalating the crisis, instead ordered a blockade of Soviet ships. In the end, a peaceful agreement was reached. Afterward, both Kennedy and Khrushchev began to soften the relationship between Washington and Moscow.

"Kennedy, during his short presidency, proposed many important steps forward. In an address at American University in 1963, he spoke kindly of the Soviet Union, thereby easing the Cold War. The following day, after almost two years of mostly avoiding the issue of civil rights, he delivered a speech of exceptional elegance, and launched a drive for a civil-rights bill that he hoped would end racial segregation. He also proposed a voting-rights bill and federal programs to provide health care to the elderly and the poor. Few of these proposals became law in his lifetime—a great disappointment to Kennedy, who was never very successful with Congress. But most of these bills became law after his death—in part because of his successor’s political skill, but also because they seemed like a monument to a martyred president."

Kennedy was assassinated on November 22, 1963.
Created by patw Published 2 days ago

Yes, he was internationally popular, wasn't he, Ron. Just as Obama was/is. I'd forgotten that.

I was 13 at the time but I can tell you that the shock was felt all over the globe. My dad was a Kennedy fan.

I think we all felt all three of those emotions in rapid succession in a continuous circle for quite a while, Gayle.

No, I guess it wouldn't have made too much of an impression on you, eddie and Bill. You youngsters you. :-))

In my sophomore year of college, I recall standing at a third-floor balcony railing of the Great Court in the main building. Directly across the courtyard was a huge clock just above the third-floor level. Whenever I think of Kennedy's assassination, the image of the clock comes to mind. It was early afternoon. Emotions of those in the court ran the gamut from disbelief to confusion to despair.

I was 4 years old so really i don't remember a whole lot.

As I recall, I was in 6th grade and had gone home for lunch. When I returned to school for choir practice is when we were told.

It sure was, eddie.

Thank you Pat for reminding me of one of our darker moments. eddie

Hard act to follow; good date to honor. Thanks, Pat.

I was working as a governess (now called an au pair but still no more than a live-in babysitter ;-) ) for a family that lived in Georgetown, a couple of blocks from the National Cathedral. When I drove with the youngest of my charges to the private school the oldest was attending, I went past several people just sitting on the curb. Very strange. I learned what had happened when I got to Sarah's school.

Several nights later, because the children's dad worked for the Washington Post and had a press pass, I was honored to enter through a side door of the Capitol Building with him and walk by Mr. Kennedy's casket in the rotunda to pay my respects.

You are right pukas47. I was a freshman at my college, and was walking across campus when someone ran up and gave me the news. I even shared the same birthday as President Kennedy, May 29th.

That is a date, where everybody remember where they were and what they were doing, when the news about the assassination stroke worldwide. I was 16 attending a dance lesson that Friday night !