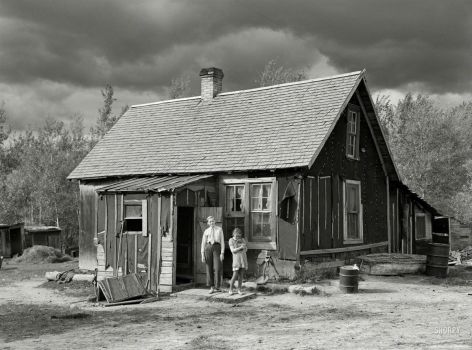 The tonalities and local contrasts in this image are fabulous. I'd guess the photographer had studied and mastered Ansel Adams' zone system.

Thank you for the explanation of 'cutover', Ed. So sorry to hear that most farms ended up agriculturally worthless. Sad for so many folks' dreams to end in dispair.
You would be a great history teacher, Ed! :-)
-Merrie

After northern Wisconsin was cleared by commercial loggers early in the twentieth century, enthusiastic promoters and optimistic settlers envisioned transforming this "cutover" into a land of yeoman farmers. Here thousands of families—mostly immigrants or second-generation Americans—sought to recreate old worlds and build new farms on land that would come to be considered agriculturally worthless. In the end, they succumbed not to drought or soil depletion but to social and political pressures from those who looked askance at their way of life.

I never heard the term "cut-over farmer". I wonder what it meant. The house doesn't look like much, but it seems to have a good roof and most of the walls have tarpaper, so it might not be too bad, especially for the times. And the girl has shoes on, so they were probably doing okay. I don't see much green for it to be called 'Green Acres', but we always name our farms in the most positve light and hope it lives up to the name. :-)
Thanks for all these great puzzles of older times, Ed. I appreciate your work in digging them up.
--Merrie