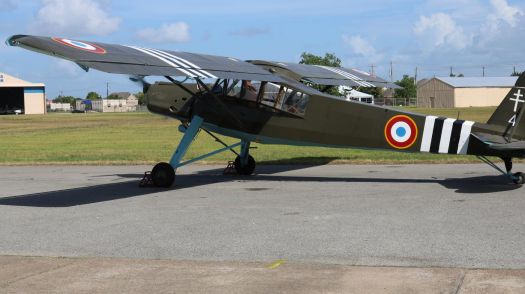 French built, restored in Texas.
Created by msjoyp Published 24 July 2020
Why this advertisement?

Our airplane is a Morane-Saulnier MS.500 Criquet, the French-built derivative of the well-known Fieseler Fi-156 Storch. This particular airplane was built in occupied France, at a factory just outside of Paris, and would likely have been delivered to the Luftwaffe in August 1944 had not Allied forces intervened. It went on to serve as a French air force liaison aircraft for the remainder of World War II (our paint scheme reflects the pattern used through the spring of 1945), then transferred to French Indochina – where it served as a liaison and forward air controller for 10 years – and finally transferred to Algeria – where it served as a reconnaissance aircraft for another three years before being retired in 1958. This airplane apparently remained in storage before being sold as surplus by the French in the mid-1970s to an American in upstate New York. It passed through several owners before we acquired it in late 2002, largely disassembled and missing several important parts. We spent the next 15 years making many useful contacts in Europe – some of whom have become good friends – to find as many of the missing parts as possible and recreate the airplane’s history. Our first flight occurred in June 2018.

Those black and white stripes were called "D-Day Stripes," and were used to identify Allied planes over the Normandy beaches.

Must have been a captured plane,as it`s a famous German transport product,