Are we people - Or are we SHEEP 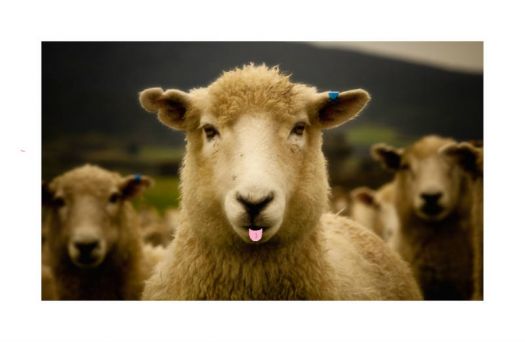 I'm proposing making September 16th a national holiday... and WHY NOT? According to title 5, part 3, subpart E, chapter 61, subchapter 1, section 6103 of the U.S. Code, the common worker in the U.S. only gets eleven national holidays. And what about congress? (I still refuse to capitalize 'congress') Did you know that congress is scheduled to be in session just 137 days this year? If my math is correct, that means congress will be out sightseeing in Rome, surfing in Hawaii, tearing down statues, blaming the NRA for the extinction of dodo birds and constructing new pedestals for them to stand on for 228 days! 228 days! And you and I get 11 days! So in the name of propriety, I am proposing several new "National Holidays"... starting with September 16th. Why you ask?

#1 - September 16, 1987 - 24 countries sign an agreement in Montreal to reduce the use of chlorofluorocarbons (CFCs). The gases, which are used in aerosols are blamed for creating a hole in the Earth's ozone layer. Ronald Reagan tells congress to knit a king size blanket to stuff in the hole in the ozone to keep it from leaking
#2 - Born September 16, 1927, the criminals worst nightmare is born... Columbo. Columbo is also the first baby to be born wearing a wrinkled raincoat
#3 - Born September 16, 1924, the original manufacturer of drool was born, Lauren Bacall - honorable mention to Anne Francis (Honey West) born September 16, 1930
#4 - Born September 16, 1919, Laurence J. Peter, creator of the Peter Principle - "Every congressman tends to rise to his level of incompetence." Famous quote ""Noblest of all dogs is the hot-dog; it feeds the hand that bites it."
#5 - Died September 16, 1984, Louis Réard, Inventor of the Bikini... need I say more?
#6 - Died September 16, 2003, Sheb Wooley, first man to recognize the existence of alien life forms. In his exposé,
The Purple People Eater (1958, #1), he is quoted as saying aliens have "It had the one long horn, one big eye"
#7 - Carol goes to a Beatles concert.... YEA!!!

I am open to debate if anyone thinks these 6 reasons are not enough to establish another National Holiday.....
Created by rswestley Published 16 September 2019

The U,S. "crazy" over Cinco was the great marketing strategy of the beverage industry. But everyone loves a party, so if you visit tourist areas of Mexico for the 4th of July, expect large parties and lots of fireworks! (that includes Juarez, a great city with some of the best Chinese food in the world!)

That (9-16) explains why my down the street neighbor was shooting-off fireworks at 11 PM last night. Bastard.

I'll be sure to drive to Juarez and celebrate July 4th next year in a like manner. I'm sure it will be greeted with open arms.

I thought Cinco de Mayo was just a way for the Beer and Tequila Company to sell more liquor and the avocados farmers to sell more dip in the USA. ;-)

Cinco de Mayo is misunderstood by many in the U.S as Mexico's Independence Day, which is actually September 16th.

John you left one out;

I am sorry to hear that. Stuff does happen. Maybe she will get a reprieve. Let's hope for the best.
Well anyway have a few beers. :)) Goodnight!!! Sleep Well!!

Nope, not a pun. Our comrade, morepiecesplz, got exiled by the jigidi elite because of a dispute with another jigidier. It happens. From what I know about mpp she may have been misunderstood, but I doubt if she was abusive. I admire mpp because she stood her ground and did not back down from "The Man"... or in this case, "The Wo Man". She is obviously stronger than me, but that's not saying much... my hamster is stronger than me. So for now we are in mourning while we wait for mpp to rise from the dead...

@rswestley
rswestley 8 hours ago
and lest we forget our fallen comrade... @morepiecesplz
John, Is this a fact or did I miss a pun?
#2 I liked Columbo and my husband could not tolerate him.
I am not smart enough to debate John, but go and have two or three cervezas!!!-9-16-19

Yeah so true, I am still waiting to hear if I on the Endangered Species list. I am sure Max took the last spot. ;-)))

Nope... this is a family show. No open ends allowed... but I could take your nose mitten to church and have it blessed... it would be a Holy nose mitten

Better get me an open-ended one!

Watchman... I think we may be on the same page. If I were you, I’d be worried. VERY worried

Way to go Max! I just bought you a nose mitten for Christmas. I guess I will need to exchange it for an x-large nose mitten

(Single biggest lie I've ever told on Jigidi, by far!)

I put forth from this day until the New Year that us (the Common Worker) and our Man and Women in the military be release from paying payroll taxes. That would give us 106 days of extra pennies to play with and no they (congress) cannot hike the taxes to cover the lost at anytime, including tax time; for they are the one that should pay for it, since they are the one wastes the tax dollars. Those in congress should have to pay triple the amount in taxes and no pay raises, unless we the common people vote on it on April 16, every twenty years. Once they leave office, they should not receive any type of benefits. ;-))

and lest we forget our fallen comrade... @morepiecesplz

Yup... and fame is fleecing Max
Carol, that alone is worth creating a national holiday... I will make that #7 on my list...
Dave, once again your calendaristic knowledge astounds me. Silly me, I thought "cinco" meant 5 and "Mayo" meant May... I think I may need a refresher course in Spanish... or another keg of cerveza….