What's Coming To Get Us? 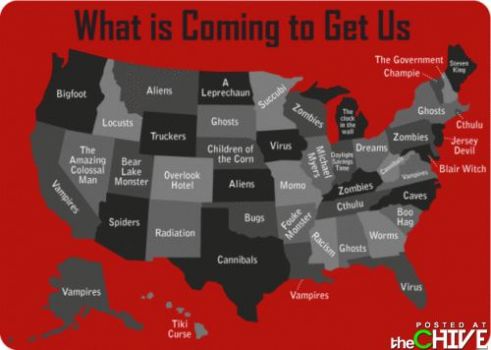 Created by ScreamQueen13 Published 12 November 2012
Why this advertisement?

This is a link to a puzzle of THE house:

It is quite the grand dwelling, with or without a wall clock. ; )

SQ, The House With the Clock in the Wall isn't exactly a horror story. It is a children's book, and while it also visits the cemetery, it is tame as far as "horror" goes. I think someone was "reaching" to find something for Michigan. ; ) There have been at least two movies filmed in MI, one was Anatomy of a Murder, not exactly in the horror genre, and another was Someplace in Time, which I had the impression was a romantic film. So maybe the inclusion of "the clock in the wall" was a humorous inclusion. ; ) Other than that MI's claim to fame in the movie area is that Jeff Daniels lives in Chelsea, MI. : )

Wow, heather thats really cool :). i didnt know what the clock in the wall meant on here. As a matter of fact i dont know a few of these. And i call myself a horror movie buff :P

Michigan -- it says: The Clock in the Wall.

The book, The House With the Clock in the Wall, was written by John Bellairs, who was born in Marshall, MI and grew up in that community. The clock in the Cronin house on Madison Street was just in John Bellairs imagination.

It's so funny - lots of movies to remember!

Does this have anything to do with RED states and BLUE states?

LOL i got stuck with the Overlook Hotel