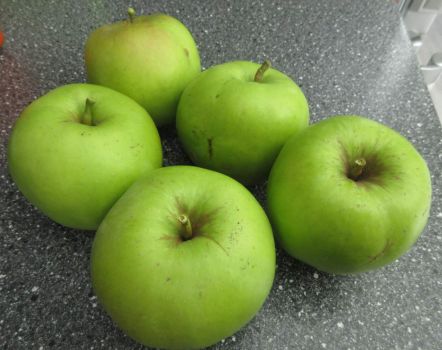 In the end it were 7 apples growing on my apple tree this year. Normally we'll have them ripen on the tree for as long as possible and harvest them somewhere in September. But since Liertje noticed a grasshopper had taken some bites of one apple and earwigs made use of the hole that was bitten in one of them, we checked every day that the others would be spared until harvest time. Then last week I noticed a brown bruised spot on another apple.....darn insects!
Yesterday night Liertje found the one with the bruised spot on the ground under the tree, so he picked it up as a slug was already helping himself to a feast. So today we decided to harvest the 5 'good' ones too and let them ripen further indoors. If we'd let them on the tree, we might not have a single bite for ourselves. The 7 in total weighed over 1500 grams (1½kilos). Not bad at all!!!
the 2 'bad apples' are cut into pieces and are on the patio table for whatever critter to take! :-)
When these 5 are ripe they're enough for baking an apple tart as they are 1190 grams!!!
Created by Impie Published 21 August 2020

Never mind, Pammi, nothing wrong with your brain, I think. It happens to me too sometimes. You can just leave it there, it doesn't matter, but if it bothers you, you can "remove" one you want to go. ♡♡

Sorry, Impie, I just noticed that I actually responded twice below. Who knows what this fertile little brain of mine commands me to do? ☺☺

I'm am so happy if you forward to to anyone whole enjoy a laugh - the more who we can make smile, the better ;o)

I didn't know that - isn't the internet a wonderful thing.
I'm sending you this link - my friend in the US sent it to me - Life After Quarantine - it'll make you smile as you eat the healthy apples :o)
https://www.youtube.com/watch?v=1FG6Y7U_XkE

Right! And I probably sent it! LOLOL ;D

I think that it was on jigidi last week that I read that there are so many varieties of apples that if you ate a different variety every day that it would take you 20 years to sample them all!

Hi Bren, We also have "Hollandse" Golden Delicious and I think my apples are that, or at least they come really close. I used to love Granny Smiths Apples from Argentina, but certainly not the French version, they taste 'dry'.
We do have cooking apples and they are called 'Goudreinet' it's an original Dutch apple! In the Netherlands we grow several kinds of apples for cooking but Goudreinet is the best and holds it flavour when cooked or baked! To eat them raw they are a bit too saur for some/most!☺☺ Let's not go into all the bans of the EU....I don't have enough time to write it all down here! :-)))

Yeah, Pammi, you're right, but if we hadn't saved them we would probably ended up with zero apples! LOL
The 8 pieces Liertje cut (he did just one apple and not two like I mentioned earlier) for on the patio have shrunk to 3 pieces....probably Magpies discovered them! ♥☺♥☺♥

Pammi - you are so right! There is nothing better than that which we grow ourselves. I have about 6 tiny tomatoes at the moment, still green. IF they grow to bigger than a pea and actually turn red, I now they will have a flavour to savour.
Impie, can you get cooking apples in the Netherlands? The EU tried to ban our Bramleys along with other native English apples. There is a secret seed bank that has preserved the seeds! (Come January 1 2021 we won't have to keep them secret anymore :o))

Impie, do not despair. I have always believed in quality over quantity and you sure have top quality in your lovely looking green apples.
Apple tart? Bon Appetit. ♥☺♥☺

Impie, do not despair. I have always believed in quality over quantity and quality is what you sure have in your perfectly lovely apples. Apple tart coming up? Bon Appetit! ♥♥♥♥♥♥

Being a nation of apple growers, most English people don't like Golden Delicious because they are imported (mostly from France) and tasteless BUT a home grown one will probably taste totally different.

Hi Bren, these are so called Golden Delicious, I believe. They're crispy sweet/saur and also good for baking an apple tart!☺
Last year I also made a lot of apple sauce, but this year I have just those 5 apples left, so no home-made apple sauce (at least not of my own apples) this year!
After I baked a tart I'll take photos and post a puzzle for all to enjoy! ♥☺♥

Well done on the 'Great Apple Rescue'! I can't think of a more loathsome, gross creature than a slug - yuck!
Are they what we call Bramley apples? Really big and great for cooking and slightly sharp?
We had a Bramley tree in our garden down south. It was really old, at least 70 years and every year we would have loads of apples. The biggest destroyers were the ring necked parakeets which were like feathered locusts. They would descend and peck away but just those apples that were near the top.
I collected as many as I could and made apple sauce and partly cooked for pies and crumble and froze it. They make great baked apples, stuffed with currants and sultanas with brown sugar...oooh, my mouth is watering.
In the autumn, those that were left I would rake into a pile under a nearby bush and the blackbirds ate them through the winter.
Please take a photo of the pie so we can all virtual taste it - enjoy!!!

Yeah, Nancy, I can't wait for the apples to get more ripened and then it's all systems go! :-))

Mmmmmmmm....imagining the wonderful aromas as the appel taart bakes. ;-PP

LOL lurdo....and thanks for liking my apple tart☺ Since you are the first person to 'volunteer' to try my 2020 apple tart I'll cut you the first and biggest piece, but no-one needs worry....since it's virtual there will be plenty for each and everyone to have a taste! ☺☺

Yeah Anne, it would've been nice if they'd all had ripened full time on the tree. For months I've been able to hide them from birds by covering them behind its own leaves and checking in on them every day, but it proves even that wasn't enough! :)

Yes, Ella, it was a tough decision to make, but I'm sure they'd all been attacked if we let them on for say 2 weeks more.... we probably would've been left empty handed! The heaviest of them all is the one bottom front of the photo with a weight of 270 grams!! Good size good weight! :)

Thank you, Betty....last year we had lots more but very small apples. The tree gave all its' power to those 7 apples and it showed!☺

Yay! you saved the apples!! And just enough to make an apple tart, too!

Well I'm so happy to hear that you'll get at least one apple tart out of them.....darn nature

Mrs. Impie, are You going to make an apple Tart ? last time that You were so Kind and invited us, I wanted an extra piece, but I am so Shy that I don´t ask for more, but this time please serve me a very very BIG slice. Your apple tart is Delicious.