For my mam - always a lady with a touch of class. 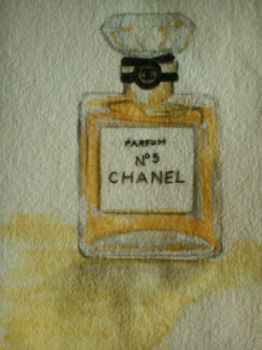 Little watercolour I did for my mam's birthday card. She has excellent taste in perfume. I've never known anyone who can wear any perfume + it smell gorgeous on them like my mam! She's often stopped by complete strangers + asked what she's wearing! When she walks by, it lingers like a haunting refrain.
Created by Amazonia1805 Published 27 August 2013
Why this advertisement?

Great minds think alike! Florrie, I've been looking for a perfume that is as near to one no longer made by Flagonard that was called Mazurka - for my mam + Eau des Merveilles by Hermes is one of them!!
Gemstone, I've also been looking at Guerlain's range of 'citrus/zest' perfumes. Vanilla doesn't work for me. : ( Much like the time I tried a tea tree based scent, smelt lovely on the sample card, the sales lady persuaded me to try it on my wrist. Delightfully fresh+breezy for a few seconds before it was like TCP + I'm refering to Tom Cat's Piddle!
My mam's nearly finished her Ô de Lancôme which is the only Eau de toilette I've ever bought for her+that's only because it doesn't come as a parfum. She also likes Clinique Aromatics + Givenchy Organza, which I've bought her in the past. I swear though, she can wear anything+smell lovely. Once we were at a shopping centre, queuing in a shop+asked what perfume I was wearing, by the women behind us. I just looked+said, 'It's my mam, not me.' She laughed + told them it was just a cheap perfume from the body shop she tried over 2 hours before!
Like I wrote on her card, 'You will always be a lady with a touch of class'. That's my mam. ; )

Great watercolour...and a first attempt at that!

Next time you're in the perfume department, ask for a spray of Shalimar (Guerlain)...but eau de toilette, NOT "parfum"...it is nice and light...hints of vanilla on me...my "signature" as like you, a lot of scents don't work for me...or set of my asthma.

This is what my wife wears. I've never heard described like that. Not only an artist but a poet or songwriter

Lol. Lucky girl. I do love N°5, it is elegance itself. I do actually like it on me too! I don't suit perfumes like my mam does. It has to be fresh, light. The perfumes in the 'Water' catagory - e.g. citrus, fruit, ocean, cucumber are just about the only ones I suit. When I was younger, I often just bought men's cologne instead, as I suit them more than a lot of the women's stuff. I do suit the DKNY Be Delicious. Maybe Santa will leave some under the tree for me this year. Or a man who'd buy me some. I haven't been bought gifts from a gentleman since I don't know when! LOL. ; )

Thanks Florrie. It was her birthday on Sunday. She loved it. I got 10 jars of Blackberry Jam from the batch I picked the other day! That was from 2kg. It made up more than I expected! Going to have a go at ice-cream + also a couple of bottles of Crème de Mure + Blackberry (vodka) Liqueur which will be ready + bottled in good time before christmas. I'm thinking it would make a nice gift. What do you think? ; )

A lady with taste. (I'm refering to your choice of perfume!) Lol. Thanks. I've not really done watercolours before. The whole painting malarkey's new for me. I've always drawn with pencils, which is an entirely different thing. ; )

my very favorite fragrance since i was 18...nice water color