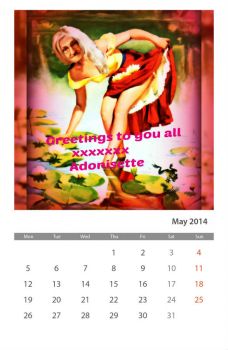 Here we have a darling bud of May - the alluring, adorable, Adonisette, seen tiptoeing daintily through the frog pond in the popular area of Bonga-Bonga known as "The Frog Pond"........
Please refrain from throwing darts at this image.......
Created by lelabugosi Published 17 December 2013

I know they are tough. My son died of cancer and the pain was in his leg so he had epidurals, amongst other things, but the relief from pain was wonderful for him.

June.... I have these epidurals every 3 months. I've probably had about 60 of them so far. They keep me able to walk and stand, and they keep the pain to a bearable level so I can lead a relatively normal life. I don't know how I'd survive without these treatments. They work miracles, but are tough to go through.

By the way, Lela.... How is Adonisette's litter doing?

Hope you feel better soon Heidi, at least it should have settled down for the Christmas preparations

Thanks to some of you, and to the rest - PHHHHHHHT!......Or words to that effect........
I find it very hard to understand the animosity shown by some people towards this FREE calendar of Beautiful Bugosis........Of course, not everyone can appreciate true beauty, hidden though it may be.......
Mr.Squirt....I do so hope you enjoy your twelve "Personalized" pages of Madame-of -the-temple!...........

I'm recovering from another epidural pain block, and don't feel up to throwing any darts today. Maybe by tomorrow. Then we can have a contest. Maximum points for defacing that ...face..., points for hitting the red heiny, and you lose all your points if you hit the poor, innocent frog .

Thank you for your support Patty-cakes. I am sending you a personalized calender with me on EVERY page!

always the same in manworld. the harlots and sluts get all the plaudits and worthy wives and mothers are kicked to the kerb. If your wife/mother turned into a slut would that be praiseworthy?

And now here we are, confronted with this "Bugosi....May" calendar page and the pure terror of SEVEN SMOOCHES from Adonisette! EEEEEeeeeeeeekkkkkkkk!!!!!

Lelabug, these smooches are getting worse! They're taking over! I may not be able to take the June calendar page! What are you doing? What are you up to? Are you trying to drive us to the Tadpole Wine bottle? EEEEEeeeeeeeeeeekkkkkkkkkk!!!!!

Plus which furthermore, here again we see the adorable Church Lady being branded with a pejorative term. This time it's "harlot." Last time it was "slut." And yet it is harlots and sluts who make the world go 'round (ding-a-ling!). Hang in there Churchy. You're all right by me!

I am finally returned to hearth and home, gemmy. I've been frolicking all day long, first playing golf, and then enjoying a MOST DELICIOUS meal in the best Mexican restaurant around.

And then. Then. Then I spent the evening (and part of this morning) participating in a wealth redistribution seminar. Placards representing relative values are randomly passed out among all the participants. Each member of the seminar declares his confidence in his placards, and the others are free to challenge him, or state higher levels of confidence, or just return his placards to the seminar proctor and await his next turn.

The seminar gods smiled upon me, and great wealth was redistributed in my direction!

Nice legs...and no lisle stockings, CL...I thought psquirt would be here by now...

Now, now, "ladies"!..........
I would just like to state that any calendars returned to the BUgosi Morphological Studios (BUMS), will NOT be replaced, if they are full of holes......

Darling? Alluring? Adorable?Dainty? I think not! I have just purchased a crate of darts!

nice bod shame about the face

Oh, poo. I SO wanted to throw darts at this inbred atrocity.