Is Hallowe'en really coming up so soon? 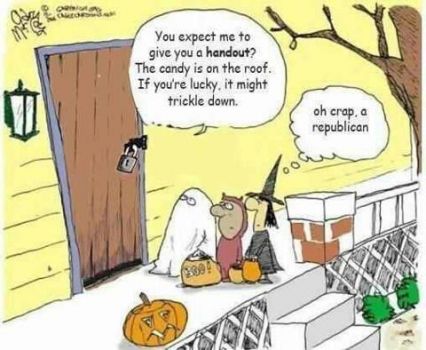 Created by beth54 Published 11 September 2012
Why this advertisement?

Good stoush guys!
The REAL stoush we could get into, is which country has the worst politicians!
Now that would be one hell of a bunfight!

Devious self centred and greedy 'leaders' are in plague proportions now. Globally.

Our tiny little (large land mass) country downunder has the highest paid politicians of any Western democracy.
They made sure of that...

(The trickle down effect is a joke btw. All it proved is that trickles defy the law of gravity..)

I have respect for your opinion also. Everyone's opinion counts - this is what sets this nation apart from all others on this planet!

You're entitled to your opinion.

Better to lose a good person to term limits than to allow some dirtbag (of any party) to set up a corrupt little kingdom full of bribes & payoffs that goes on for decades.

Ahhn the joys of freedom and Democracy...

And if they do a fantastic job, we can't keep them..... There are cons as well as pros to term limits...

I was commenting because It offends me when any party is singled out as they are both corrupt beyond redemption. I believe that at least 90% of those in elected government service are liars and opportunists and should be voted out. We need strict term limits for a chance for honest people to get in and do a good job and then leave a positive legacy when they leave office. If they do a poor job then we are free of them anyway.

I do? Read your comment versus mine! And puzzles against Republicans are reported all the time, whether you want to believe it or not...

I just KNOW that if this had been a picture slamming the democrats or, heaven help us, Obama, it would have been reported and deleted within minutes. pdevredis, you seem a little thin-skinned and overly sensitive.

You do have the perfect profile name, DearbornDunce...

Oh, it all makes sense, now - Halloween was invented by a Democrat who wanted something (candy) without working for it!