Does anyone know what these little balls are on my Miracle Maple's leaf? 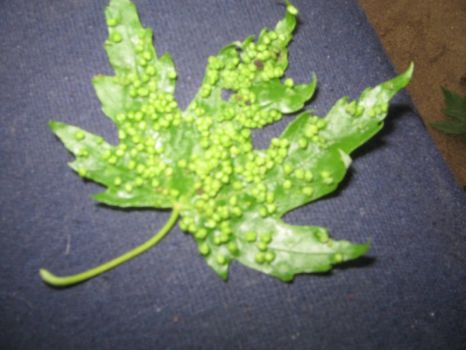 I resemble the comments made about me. I was just going to suggest that the growths are caused by mites, but someone beat me to it. So I mite not answer it at all. Let us spray that there is a solution to the problem. And to think that the people of jigidi.com have the gall to think I don't have any serious ideas. It bugs me!!! ;-)

GIG has a great answer! Yes, he's the Master.

Yes, we posted at the same time. I'm not a plant expert (I can kill a healthy house plant in just one day) so I'm glad Jim posted that info. I learned a lot.

In anticipation of PW checking in with one of his horrendous puns, it's my observation that a lot of people with tiny balls have a lot of gaul!

Wow! JM_C and Heidi must have crossed in the mail, so to speak. I'm very glad to know that these won't (probably) hurt the Maple tree as I love it dearly. Remember that this tree was killed twice; once by me uprooting it from where it started, then some little sociopath cut it iff just above the dirt line, then cut it's tiny trunk into 1" pieces. I cried like a baby. NOW it's taller and wider than our house and provides super shade!!

I believe it's insect damage. But I could be wrong. Best to go to your local garden center and ask the owner. They'll happily lettou know so they can sell you a remedy.

Galls are abnormal plant growths caused by various organisms (insects, mites, nematodes, fungi, bacteria, and viruses). Because of their unusual forms and colors, galls often cause homeowners to become concerned. However, galls seldom threaten plant health and their numbers are highly variable from season to season. For those reasons, control is generally not suggested.
Galls are formed by insect/mite feeding or egg-laying activity. Either mechanical damage or salivary secretions (introduced by insects and/or mites) initiate increased production of normal plant growth hormones. These plant hormones cause localized plant growth that can result in increases in cell size and/or cell number. The outcome is an abnormal plant structure called a gall.

Gall formation generally occurs during the accelerated growth period (late spring) of new leaves, shoots, flowers, etc. Mature plant tissues are usually unaffected by gall-inducing organisms. The gall-making organism develops inside the gall and the gall continues to grow as the insect/mite feeds and matures. Once gall formation is initiated, many galls will continue to form even if the insect dies. In addition, most galls are usually not noticed until they are fully formed and remain on plants for extended periods of time. During heavy infestations of leaf galls, leaves may drop prematurely from the tree. Most galls do not adversely affect plant health. Therefore, management is generally not suggested to protect plant vitality. Chemical applications are often ineffective since the precise timing of sprays is critical. To be effective, sprays must be timed to coincide with initial insect/mite activity before gall formation begins. Once galls start to form, they conceal the causal organism and it is too late for treatment.

None of the others I can see have this going on. Any ideas?