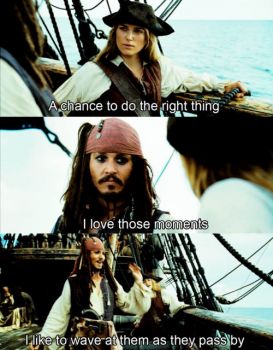 What is the name of the character played by Johnny Depp in the Pirates of the Caribbean film series?
Created by Stillmanic Published 17 April 2019

I can't believe that anyone missed this!

The family that adopted the last 2 puppies from Seal's litter chose Jack as one of their names. They made a good decision, as the one named Jack is a perfect canine version of Captain Jack Sparrow!

You really should Ken, they are really funny :))

I've heard that name many times, even though I've not seen the movies. I just couldn't make the link.

Onward and downwards for me!

Captain Jack Sparrow is a fictional character and the main protagonist of the Pirates of the Caribbean film series. The character was created by screenwriters Ted Elliott and Terry Rossio, and is portrayed by Johnny Depp. The characterisation of Sparrow is based on a combination of The Rolling Stones' guitarist Keith Richards and Looney Tunes cartoon character Pepé Le Pew. He first appears in the 2003 film Pirates of the Caribbean: The Curse of the Black Pearl. He later appears in the sequels Dead Man's Chest (2006), At World's End (2007), On Stranger Tides (2011), and Dead Men Tell No Tales (2017).
In the films, Sparrow is one of the nine pirate lords in the Brethren Court, the Pirate Lords of the Seven Seas. He can be treacherous and survives mostly by using wit and negotiation rather than by force, opting to flee most dangerous situations and to fight only when necessary. Sparrow is introduced seeking to regain his ship, the Black Pearl, from his mutinous first mate, Hector Barbossa. Later he attempts to escape his blood debt to the legendary Davy Jones while fighting the East India Trading Company.
The Pirates of the Caribbean series was inspired by the Disney theme park ride of the same name, and when the ride was revamped in 2006, the character of Captain Jack Sparrow was added to it. He headlined the Legend of Captain Jack Sparrow attraction at Disney's Hollywood Studios, and is the subject of spin-off novels, including a children's book series Pirates of the Caribbean: Jack Sparrow, which chronicles his teenage years.

Max you must make the effort they are really funny :))

Pooh! Never watched the series. (Though its namesake IS a fun ride.)

A pirate and his parrot, were adrift in a lifeboat following a dramatic escape from a valiant battle.
While rummaging through the boat's provisions, the pirate stumbled across an old lamp.
Secretly hoping that a Genie would appear, he rubbed the lamp vigorously.
To the amazement of the castaways, a Genie came forth.
This particular Genie, however, stated that he could only deliver one wish, not the standard three.
Without giving any thought to the matter the pirate blurted out, "Make the entire ocean into rum!"
The Genie clapped his hands with a deafening crash, and immediately the entire sea turned into the finest rum ever sampled by mortals.
Simultaneously, the Genie vanished. Only the gentle lapping of rum on the hull broke the stillness as the two considered their circumstances.
The parrot looked disgustedly at the pirate and after a tension-filled moment spoke: "Now yee've done it!! Now we're gonna have to pee in the boat."

How do pirates know that they are pirates?

They think, therefore they ARRRR!!!!!