My chuckle for the day came in an email. 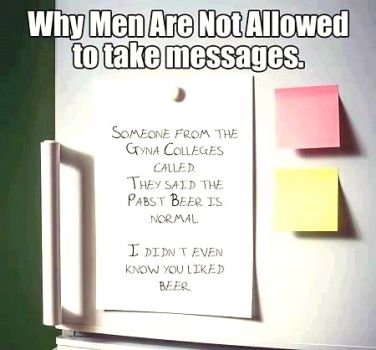 Image copyright: from the internet.

Goodness Edie, after reading it out loud, then I got it!!! And yes, I do agree, - men are so useful for other things, LOL.
PJ

Hi Edie! Yes, we have just returned from 10 days in Spain, visiting friends. Before that we were in Schwabisch Hall, north of Stuttgart, Germany. Both places were toasty warm and stunning in their own ways. Now we are back to grey, drizzly skies. Ah, the joys of the British "summer"! ;-))

I didn't think your comment made you appear stupid at all Wendy. I had a hard time reading it the first time as well. But then I need stronger glasses, that's my excuse. lol ;-))))

I better clarify something here- I am stupid but not quite as stupid as my comment makes me appear. The only letters I could see in the first two important words were the G and the C and an A.
But I could see the PABST BEER. It was only after I solved it, that I could read the other letters.

You said it Hester. Nice to see you. Were you flitting around again on another adventure?

Snorting into my sangria in a very unladylike manner, Edie! Men's brains do not compute anything once they focus on beer ( Home Simpson rules! ) lol

Thanks everyone for your comments. They brought my first smiles of the day. I can so see some guy writing this down without even wondering what it meant. lol :-)))

Yep, that would be my man. Love him anyway.

That'd be right.... They hear beer and everything else is out the window.... ｡◕‿◕｡❤｡◕‿◕｡

This is so funny, & it takes a woman to figure it out.
TFS.

I've seen this before, Edie, but it still brought a chuckle and a big smile. Thanks. ☺♥