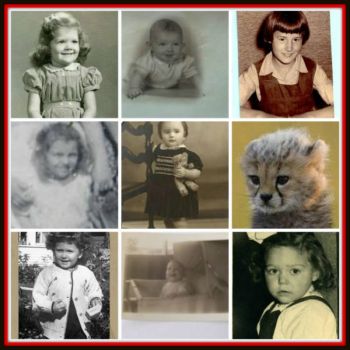 See if you can figure out what the baby cheetah is all about.

Glad you like it, Colin.
Hi, Toto. Good idea.

Jan42ful looks like she just stepped off the screen of To Kill A Mockingbird in the role of Scout.

Thanks, there sure are a lot of them. :)

A great collage of jigidiers!

Thanks everyone for stopping by. I have 4 more photos for the next one. Still need another 5. :)

I recognize Jill. She used to say she and I were twins! LOL. Some people believed her:)

Hi Snooker, thanks so much for that. You have done a great job with these collages and a thrill to see my self there. What a great group of cute kids there, including Barb's furry baby photo. Hugs, Janet

This was a great idea Snooker. Thanks!
I'm playing catch up for being off two days....Whew!!!

Sue49 has a couple with her brother and family - I'm sure she won't mine :o)

Think you are right on all counts, BC. :)
You are very welcome, Jan.
Got it, Marry. Watch for the next collage. :)

Btw, for those who do not have their childhood pictures digitalised... I took photo's of my photo's. Sometimes they need a bit of correcting on a programme like tuxpi, but generally they come out sort of OK ☺☺☺

Pat! This is great! I love all your collages. If you have room for one more picture, I just posted mine!

What another wonderful trip back through memory lane! Thanks for including me, too,
Snooker! :)))))

Ah...let me see...I predict - too many late nights doing puzzles...I won't win the lottery...that tomorrow is the day after today...and the postman will lose all my Valentine's Day cards

Got her, Nev. You are doing a great job of finding new ones. Have 7 for the next one and need 2 more.
Glad you like them, Raaike.
Any predictions, oh wonderful Big Cheese? :)

And now they are all becoming Ten Stars who knows what the future holds...

Snooker, what a clever idea !
I love all those collages with old photos of children.
Lots of fun jigidi ! :-)))

Already have Agnes for the next one and just grabbed sweetpants' picture, Nev. Thanks again.
Shirley, the furry baby was just perfect as SunnyBarb always has an adult cheetah as her avatar.
Thanks, furry baby, Suzy, Brie, and Maria.

So thats about 30 out there so far...amazing! Thanks snooker for your part.

Aww.. thank you snooker !
Thanks for putting so much fun back in puzzles!

Oops! sorry snooker, I went for breakfast and didn't get back for a while, I see you have everyone's names and the ones I didn't know. love our furry baby :))))

You got the last ones, Brie. Well done. Will look for Gail's profile. It growed like Topsy alright. :)

The middle is Raaike and to her right is SunnyBarb25; bottom middle is Neville
Gaillou has her picture as her avatar too.
This is such unbelievable fun - and there are so many new names appearing in the leaderboard - who ever would have thought it would have taken off like this - 'it growed like Topsy'

Aw, geeze. This will require some work on my part. They are all so flipping cute!!!
Way to keep 'em coming, snooker! :)

Hi Pat. Saw, thanks. This is a lot of fun. List under puzzle very handy.

Sorry, Francine. It is Gerda. :) Others are correct and have been added to the list under the puzzle. ♥♥

Could the bottom right one be Joyce (Cakes)?

Name the ones you know, Shirley, and I'll put their names in if you are correct. Thanks everyone.

The first one is Jill (Art4sight).
Perhaps that's Jan (jiggybelle) bottom row left.
The last little girl looks so familiar to me. (I'll be back. Putting on thinking cap.)

I've seen the mummy cheetah around :))) good one, I can put names to five, Thanks snooker,

This idea of yours is really snowballing snooker! More great photos.

Hit the wrong key and deleted my comment but you know I did it so....got this one on my son's tablet. Say hi to everyone for me, hugs. ♥