A few famous paintings with a fat cat added 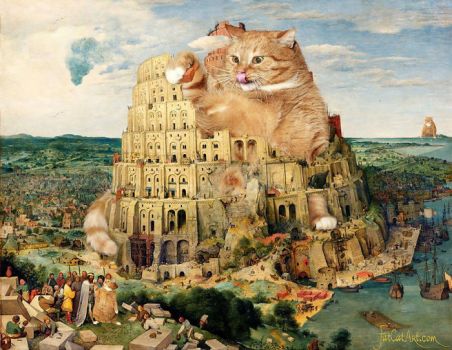 TFS, I love these they remind me of a movie that Adam Sandler was in where he designed clothes for the fat cat it was a funny comedy also co-starring Melissa Torme and Jack Nicholson it was called anger management.

The fat kitty at the top is furious with its kitten subjects : they haven't brought it enough mouse dishes so it is going to go on a strike and stop the building of the god*** tower. Marina.

Have been told https://translate.google.com is a pretty good translator. Have you tried it? The fat cat will be waiting to hear. :)

At this moment I do not care so much that fat cat, like that damn tower ... it's the fault of it that I spend so much time to express what I want to say (and maybe even with the help of a translator).

That would be hard - to love cats and not be able to be close to them. :)

I have to wait until the wife is out of the room because she is allergic to cats. She loves them, though.

Good to see you again, PWH. Thought you had given up on the cats. :)

YO, you've got to be kitten us - with all those cats inserted into the paintings. Let meow-t of here.

Was told by a friend this is the Tower of Babel by Pieter Bruegel the Elder. Now why didn't I know that? LOL

Your guess is as good as mine. Have no idea what some of these symbolize. :)

Undoubtedly, there's a book of these paintings, and we should have bought it. Maybe it would tell me why Fat Cat is licking his chops over what looks like a brick he's about to drop on something...or someone.