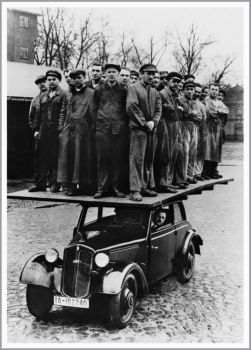 Standing room only
Created by JM_Cookie Published 18 January 2016
Why this advertisement?

I think the car is a 1934 Audi, DonnrBrook and what we see is an attempt by the Audi company to demonstrate how well built and strong their cars are. This car will not be moving with this load and the men will only stand still long enough to take the picture, then they will be helped down. By 1936 the start of war was putting a stop to much of this sort of thing.

I wonder when this picture was taken. Looks like a load of workers going to work - a shuttle bus? maybe?

I am not sure how they got up there, but getting off in not a problem :-)

Looks perfectly safe to me. LOL!

How do they get on and off?

What gets me is that at some point they thought this was a good idea !!

What! They're trying to prove how strong the car roof is?

I agree with petenbob. Funny. Thanks, Mat.

the man in the car is the bravest of that group.