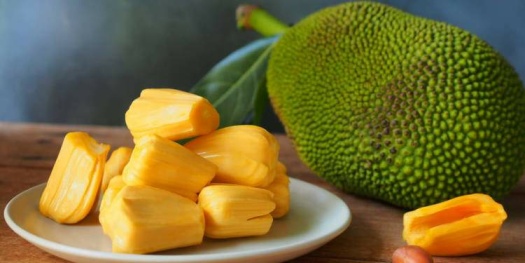 The jackfruit (Artocarpus heterophyllus), also known as jack tree, is a species of tree in the fig, mulberry, and breadfruit family (Moraceae.) Its origin is in the region between the Western Ghats of southern India, all of Bangladesh, Sri Lanka and the rainforests of the Philippines, Indonesia, and Malaysia.

The jack tree is well-suited to tropical lowlands, and is widely cultivated throughout tropical regions of the world. It bears the largest fruit of all trees, reaching as much as 55 kg (120 pounds) in weight, 90 cm (35 inches) in length, and 50 cm (20 inches) in diameter. A mature jack tree produces some 200 fruits per year, with older trees bearing up to 500 fruits in a year. The jackfruit is a multiple fruit composed of hundreds to thousands of individual flowers, and the fleshy petals of the unripe fruit are eaten. The ripe fruit is sweet (depending on variety) and is more often used for desserts. Canned green jackfruit has a mild taste and meat-like texture that lends itself to being called a "vegetable meat."

Jackfruit is commonly used in South and Southeast Asian cuisines. Both ripe and unripe fruits are consumed. It is available internationally canned or frozen and in chilled meals as are various products derived from the fruit such as noodles and chips.
Created by BACKin15 Published 27 May 2022
Why this advertisement?

Another one I've never tried, but would like to try. This has been an interesting series.

I don't want to mislead anyone... it's the texture. Like I said, on cooking competition shows, when meat is not allowed, I've seen it substituted, like portobello mushrooms, to give the 'feel' of meat . As for nutritional similarities, I have no idea. I think the taste is mild.

To be honest, it doesn't look like it'd be tasty.
Thanks, Jill. Have a great weekend, as well.

I've seen this one before, too, @morepiecesplz
But, I'd never heard of it being used as a meat substitute.

Do know this one, have tried it but wasn’t fussed on it. Have a great weekend Donna ❤️

We have this in stores here, but I never bothered to try one. I see this often on cooking competition shows where it replaces meat for texture.