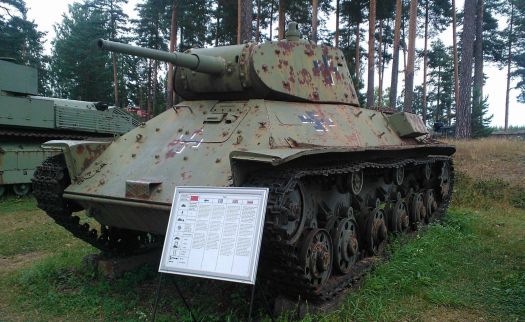 This vehicle is one of two surviving T-50s in the world, somewhat remarkably since only 69 were built. It is a Soviet light infantry tank which the Finns captured on the Leningrad front. This tank has the Finnish light blue swastika marking--nothing whatever to do with German Nazis--and sports additional bolted on armor. You can see the fastening bolts on the front of the hull and on the side of the turret. The additional armor increased the protection from a standard 37mm to 57mm, enough to give a decent defense against anti-tank rifles but not enough to handle heavier anti-tank guns.

The T-70 was an advanced design, with sloped armor, torsion bar suspension, a three-man turret with a commander's cupola, and a radio in every tank. It was armed with a 45mm gun. It was powered by a specially designed V-4 six cylinder diesel engine which gave the tank a top speed of 60 mph--rather more speed than was common for an infantry tank. Unfortunately, the V-4 engine was not reliable. It cost as much to build a T-70 as it did to build a medium T-34 tank. The cost and the mechanical reliability problems led the Soviets to abandon the T-70 design and the infantry tank concept altogether.