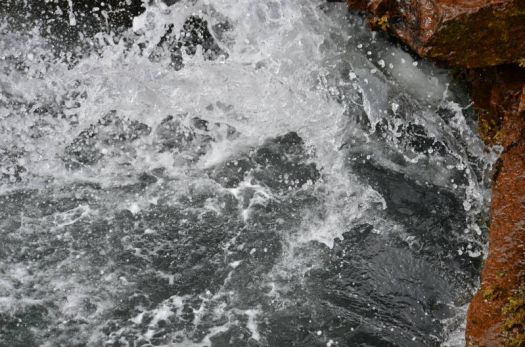 Thunder Hole in Acadia National Park is a narrow channel of solid granite, and a real draw for tourists. When the surf comes in at a particular way (two hours before high tide or during a storm), air is trapped in a cavern that is higher than the inlet. The resulting escaping air causes what sounds like thunder. Water has been known to spout to 40 feet in the air when conditions are right. Although a popular attraction during storms, visitors must be aware of the dangers of the surf as “rogue” waves can (and have) sweep people into the ocean.
This photo was was not taken at one of the more spectacular times....in this you can see the water coming back out of the cavern.
Created by pumpkinhead Published 15 January 2016
Why this advertisement?

Poor Brenda! BUT, lucky that the rest of the gang was there to save her!!! :)

I'm thinking it's a carnival with all of the gawkers, Laura. Not a place I would want to be.

No, I don't recall ever seeing it at it's fiercest.

Nostalgia time again! There was a place nearby our village where this exact phenomenon gave us some adventurous play. Known as "the blowholes" because of the spout, it was a regular playground for us kids when the tide was out. We used to crawl from the sandy beach up through the rock till we got out at the top. It all went awry, though, when Brenda Morgan discovered the hard way that she had put on a little too much weight!! We had to pull her out backwards but we beat the rising tide!!
Good fishing spot, too☺☺

Thank you for your comments Janet, Jacki, Barb, Patti, Jacki and Rob!
There are SOME smells that would be nice, Barb-some flowers, food, the woods after a rain.....but you're right-there are probably more that we wouldn't want to smell!!!

I like the Aussie term of blow-hole, rob. It's more dramatic. :)

I'd love to see - and hear this going off Suzy - and I like the name of it! We have a couple of similar ones here that are called blow-holes, but thunder hole seems a better title:)) Thanks :))))

I got to see Old Faithful at Yellowstone park once (in 1958) but this looks fascinating. Thanks Suzy!

WOW! Gorgeous and so interesting too! Thank you Suzy!

so, probably not a good swimming hole? thanks suzy.

That sounds like a fabulous place Suzy, but I can understand your reluctance to visit with a lot of tourists. Fabulous photo, thanks and hugs.

Folks really are lackadaisical during storms and high surf, Lunie. They think it's fun to have the water wash up on them. Just a few years ago, a number of onlookers who were too close, were washed out to sea, with one dying and others suffering serious injuries.
In all the years we've been to Acadia, Ardy (3o years), we have never seen Thunder Hole putting on its show . First, we don't go to that part of the park often, and secondly, we don't go during high seas or at the correct tidal time.
There are times we've "heard" a rumble of thunder from here, Lorna, but never in perfect form! I have seen photos of the water shooting up into the air, and it must be a marvelous experience to see (from a safe distance!)
Another phenomenon of nature, Shirely :)
Did you see it when it was really roaring, Laura? We have not caught it at the right time.
Hehehehe, Gracie! This is just a little itty bitty close up of the "hole"!~ :)
Wouldn't it be awesome to have sound (and smell!) on the puzzles, Barb?
It really is, smllpkg. It draws tourists in droves (which is why we usually avoid it!). :)

What an interesting phenomena!

Wild and wonderful, I love it Suzy....too bad we can not make our puzzles audio ready....thanks :)

I almost got deaf solving this Suzy! really wild!

I've been there! It's another walk down memory lane!

Ooh! It must be an amazing sight and sound! Thanks for the info.

This is so fun to visit. I always manage at least one stop here. All the times I've been there it has never been during a bad storm. But even knowing where I am the sound can have me checking the sky, ☺ Thanks, Suzy.

The danger is camouflaged by the beauty of this photo...well done Suzy!