Happy July 4 to the USA and The Earth - Aphelion! 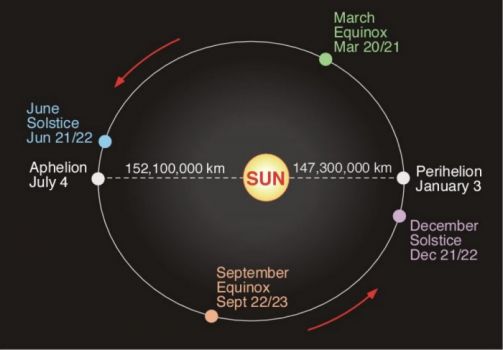 When the moon is at its closest, we call it perigee, and at its furthest, apogee. If a full moon happens to occur very close to perigee, we call it a supermoon, because it does look a little bigger in the sky, being so much closer. Conversely, at apogee it is a micromoon because it is further away and appears slightly smaller.

Today the earth is as far away from the sun as it gets in its orbit. We call that aphelion. The sun is slightly smaller in the sky than when it is at perihelion in January.

So, happy Independence Day to the USA, and happy aphelion to Earth.

Just trying to put things into perspective by imagining sliding the US down closer to the equator.

What I meant was if the US was located as close to the equator as Australia, Kansas City would be at about the same latitude as Miami is now.

Sorry, Jerry, it's not often I feel this way but - not sure what you mean.

I agree that many people don't realise how much closer to the equator Aus is than Europe and N America - we are so full of ourselves and so self centred, we forget that the world isn't revolving around us some how. Even Tierra Del Fuego (Americas) and Cape Town (Africa) are pretty North for being South, if you follow. Compare that to the N end of of Greenland, the even further north islands of Canada, Prudhoe Bay and Siberia - well, there is nothing but Southern Ocean at those latitudes in the S hemisphere. And where the Arctic is water, the Antarctic is land. Wacky!

I don't know what you mean by " If we were to share the same latitude in the north that you have in the south, we would have to drop down to where Kansas City would be where Miami is now."

Mazy, was just looking at my world map. If we were to share the same latitude in the north that you have in the south, we would have to drop down to where Kansas City would be where Miami is now.
It's sometimes hard to consider how much closer Australia is to the equator.

Oh, thanks guys. This one I wrote without looking stuff up. So telling me it's clear means a lot!

So, Jerry and Alex - Australia isn't blistering cold in the winter, and mild winters are determined by lat and landmass etc...

Were we to wake up on an opposite wobble (there are several wobbles involved, and that's just the elementary version) we would likely find it colder in the winter in the northern hemisphere, but it's debatable how the southern hemisphere would react, since it is mostly covered in water (absorbs and evenly distributes heat) and the northern hem has so much more landmass (absorbs and quickly pumps back out heat). And that's just the atmosphere - consider the liquid layer of our planet...

Great explanation! That brings to mind a story...
Years ago I was in a bike (bicycle) club, and -- inspired by NASA -- a number of us endeavored to accomplish our very own "Moon Shot", i.e., to "ride our bikes to the moon." We each tracked our mileage, which was a little more trouble then, without bike computers, FitBits or apps. I recall using measuring tape and county maps for far-flung rides or using my car's odometer to figure out the length of local rides. We dutifully sent our miles in monthly to a fellow who was coordinating the effort. He reported our progress in the club newsletter. Excitement built over several years, and increased notably when we realized that we would likely achieve our objective that summer (1986, I believe). Then, -- a surprising discovery: apogee and perigee! Holy cow, we almost overshot the moon! We'd been aiming for apogee, but had almost run right past perigee. Whoops! All agreed that perigee was a worthy objective. So, with relief and a jubilant sense of accomplishment, we celebrated our achievement with a Moon Shot party. I don't think there was any enthusiasm for the ride back home...

And our winters are mild.. radiojerry :-)

It's kind of an intricate dance, iceng and seen as a good theory of the reasoning behind the cycles of ice ages.

I imagine it has all sorts of effects on oceanic currents, too, Jerry. Wonder if they change a lot over time like ice ages do?

So that puts Earth closest to the sun during Australia's summer. No wonder they get so hot!

This is beautifully clear Mazy thanks for posting..

Somewhere I heard this earth oval will precess every 23,000 years but never learned the reference frame..