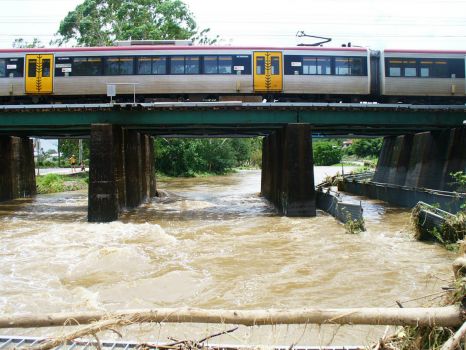 It has been on t.v. in the Netherlands; the fires, the rain / flooding. The animals that have died in the fires etc.

E merci a tu, aussi. (And that's the extent of my very old school-days French!)
Actually, I took this picture several years ago. It was only minor flooding, but it is in a stream very close to where I grew up, so was of some interest to me.

The current floods have been much worse, with some rivers rising as much as ten metres in a few hours. People have gone to bed at night, thinking they were safe... and been wakened by noise in the middle of the night to find more than a metre of water running though their homes. I might be able to publish some pictures of the current flooding in the next few days. Fortunately, Brisbane escaped with very little damage this time. :)

Has this been mentioned on French television?

Love your comment! And your question. Many people in Australia are asking the same question at the moment. Also in New Zealand. First the volcano on Whyte Island exploded, killing several visiting tourists from a cruise ship, then they were engulfed in the smoke from our bushfires (on the other side of the Tasman Sea!) then they had their own experience of flooding from unusually heavy rain.

It's been an interesting time for all of us down here.

It's really unbelievable.
First extreme heat and draughts; then terrifying biggest bushfires ever and now terrible rains and floods......
Are things ever normal in Australia?