I Love Working With 3D and Illusion 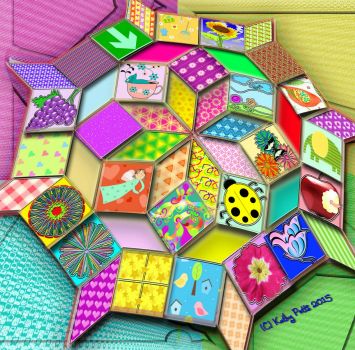 I absolutely love working with 3D and illusion. Having no earthly what I am doing, it has been, and is, a journey well worth the taking! I am so glad that we have Jigidi so that all of us who create get a chance to hopefully entertain and brighten someone else's day with our creations.
Created by Hummingbird59 Published 13 July 2015

Yeah, she is very talented and her life has unfolded exactly NOT how I thought it would - I thought she'd end up in the sciences cos she's so bright - and I'm still a little shocked that she's unfolded this artistic and creative side of her self. On Tuesday night she got notified that she's just won a gold medal in the romantic sci fi section for her Survivors Book 1 from some crowd called "Reader's Choice Awards". We haven't a clue what that means... but she won't be going to the awards ceremony in Miami... thats a big, expensive flight!

She illustrates too?!?!?!?! One very talented daughter you have there Glenys!!!

My daughter is planning on writing some, she has heaps of ideas, and she can illustrate them herself too - my avatar here is cropped from of one of her comics she wrote and drew. Meanwhile, she has published a quadrilogy in a post-apocalyptic world - called Survivors, set in NZ (author VL Dreyer), it was a best seller on Amazon for a while there for that genre. And she also is writing novels of a more erotic nature - each story, two versions - you can either choose the full erotica version, or the "sweet" version without all the saucy scenes written in it (written under the pseudonym of Abigail Hawk).

Well, I just had to order The Great Big Block of Chocolate too!!! I love children's books too!!!

I remember years ago when our son was in college, he made a trip home and was distraught. Can't even really recall what he was so upset about. His life was changing and he was growing up and spreading his wings. I remember I so wanted to console and soothe him. Then I had an idea. I hunted down one of his favorite children's books from so many years before called Noisy Nora. I read the book with all the gusto and excitement it carried. The same way I had read it so many years earlier. The magic of reading....... to a child, and now to my college age son.......did indeed do its magic. It closed the gap of a few years spent apart. He felt the love and caring I held for him. It was indeed magical. Another great memory to reflect on!!! Thank you so much for bringing back the memories :-))))))

I am sure that you had a great influence on your daughter becoming an author. Has she written any children's books?

oh... and good luck with the adoption. I hope they succeed. :)

Oohh yaaay! such a good story with a good moral behind it too. I love children's books - they are so colourful and delightful. When my daughter was a baby to school age, I'd buy her 2-3 books every single week so by the time she went to school, she had a huge library and was already reading (and is now an author herself!) but my sons had no interest in them at all. I don't know where they went. I miss them. The Great Big Block of Chocolate was also a great favourite. Good moral in the story too. And it was fun rolling the word chocolate through your mouth as your read it... http://www.amazon.com/Block-Chocolate-Christine-Redhead-Janet/dp/0908643756

I just had to get the book!!! Ordered it from Ebay just a few minutes ago. Tried to get it through Amazon but they don't accept PayPal. Thanks so much for telling me about the little book. I have all of our sons books from when he was a child. Maybe one day we will have some grandchildren. They are presently in the process of trying to adopt two little girls. Sure hope the adoption goes through.......

LOL! I think that turtle was meant to be yours! What a lovely memory for you. I wonder who painted it huh. Must have been someone's pet at some stage. I hope it survived ok in the wild. "Little Turtle's Big Adventure" by David Lee Harrison was one of my daughter's favourite stories (mine too) http://www.paperbackswap.com/Little-Turtles-Big-David-Lee-Harrison/book/0394834429/ this version

Astrojoy, believe it or not, when I was a child, someone in our neighborhood found a little turtle that was painted all different colors and brought it to me. I kept it for a while, then released it back into the wild. Low and behold, some time later, someone else came across the little turtle and brought it to me. LOL LOL It seems that my love for animals has pretty much always been known. LOL LOL

This puzzle was fun to work. Great way to start the day!!

Or it also looks like a very colourful turtle shell!

Thanks for the delightful comments Jane and Astrojoy. So glad that you liked and enjoyed it. And now that you mention it Astrojoy, it does look like a collapsed house of cards!!!!

Another very clever design from you Kathy - the designs remind me of a collapsed house of cards. Thank you :)

I loved the 3D effect! It did entertain and brighten my day. Jane