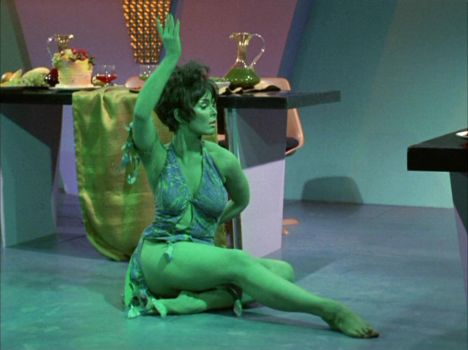 According to the IMDB the character "Marta" is

" A delusional, seductive, Orion Slave Girl that Bluebeard imprisoned in Elba II's penal institution. Here, Marta met Garth and was Garth's queen, until he blew her to bits by demonstrating a new explosive. "
Created by amanaplan Published 19 February 2014
Why this advertisement?

Hmmm, amanaplan, thanks for your response, but it was rather cryptic. I guess that's appropriate when you're talking about passwords...

BCIT - I presume that's British Columbia Institute of Technology. Do you still live in British Columbia? It is a very beautiful part of the world, and I have always enjoyed my travels there. I've only been a handful of times, certainly not more than a dozen, but I am very fond of that province.

I remember working with computers in the early 1980s. It was a requirement in my school to take the one and only computer class they offered. The intent was to prepare us for the "computer age", but I could tell we were wasting our time. We learned to program in BASIC, which was completely ridiculous. We had to write programs that would add two numbers together or find an average of several numbers. I remember thinking that there was no way in the world that any of the curriculum would ever be practical knowledge. To accomplish what we did, a person could just use a calculator, or better yet, a pencil and a piece of paper! Clearly, if computers were going to become popular household devices, they would have to do more and become user-friendly. Nobody would spend hundreds of dollars for something they had to program themselves. Of course, those computers running BASIC were much more advanced than the one my mother brought home from work.

That occurred a few years before my exposure to "computer programming". She was an elementary school media specialist, and was learning the ins and outs of personal computers. She had a number of programs, including the once-ubiquitous "Oregon Trail". All of the programming for that computer was on cassette tapes!

And that was much more advanced than the computer my father used years before to analyze research data for his doctoral dissertation. That computer filled a small room, and his data were all stored on computer punch cards! Today, he laughs about the fact that he - and all the graduate students of that era - protected those punch cards with their lives. Imagine having a box full of those cards, which had to be in their original sequence to be of any use at all, spill all over the floor. You'd spend nearly as much time trying to reconstruct your data as you did compiling it in the first place!

In the end, I am SO relieved that I was right about computers becoming easier to use, more powerful, and able to do more than simple math problems. Just look at what we can do today, and how easy it is! A typical pc or iMac is more powerful than that entire bank of computers you see at Mission Control in old NASA footage! In fact, that's actually true of most smart phones! Nowadays, you can't even protect your phone with just 4 characters - we've come a looooong way since 1985.

On another note, I'm sorry to report that leonardnimoystartrek hasn't seen my comment to come solve your puzzle. He hasn't logged on, at least under that name, since January.

Thanks for the comment and the link .
My first assigned computer password ( 4 letters !) was on a mainframe at BCIT in 1985. Everyone else got a random jumble, but mine was an actual name. It was easy to remember and I've been using that theme to log on to systems ever since. (Short answer- you're right)

A great puzzle, amanaplan. I saw your name on the leaderboard of a puzzle by Bill_I_Am called "Astronomers have found liquid water on Mars". I figured your name must be derived from that famous palindrome ~ "A man, a plan, a canal - Panama!" (was I right?) That interested me, so I thought I'd come check out your puzzles.

As to the comments already made (some 4+ years ago), I certainly knew from whence this image came, and even which episode it was from! I'm not quite old enough to remember the original broadcasts of Star Trek, but I definitely grew up watching the reruns. It's one of my favorite shows of all time, even though it's a little "campy" by todays standards.

I also know of a young man who could identify the source of this photo. I think @leonardnimoystartrek will have a good time solving this puzzle, too.

You neglect to mention, of course, that this is from the original Star Trek. I'm afraid most Jigidiers would no longer know that without being told.