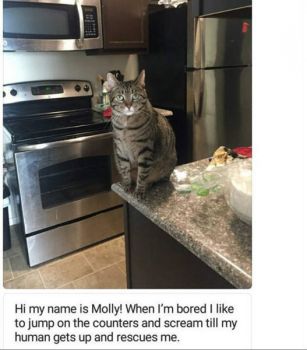 Bad cat! He knew how to get revenge on you for keeping him off the table and counter. :)

Wow, never heard of that before either, mean little spirit there...so sorry ... Sherry :)))

I tried all these remedies on my only "air" cat. None worked. But although he broke a ton of stuff being where I didn't want him, there must have been something in my voice about the counter and table, because he didn't go there more than once (or maybe they just weren't high enough for him). He took perverse pleasure in looking at me and swatting a collectible off the shelf, or the mantle, or a high windowsill (10 ft).

Have you tried double-sided tape on the edge of the counter? They don't like getting their paws stuck. Works on dogs that "counter surf", too.

We used to have two cats Casey and Twinny I was so proud they never jumped on the counter, until we got home after it had been raining and I saw paw prints on the table stove top and counters, never did it when we were there!

LOL From the frying pan into the fire for you, Carol. That is a great story! :)

I just picked my cats up off the table, shouting "No cats!" and put them on the ground. Didn't work all the time. Then I started giving them a pat of butter when they stayed on the ground, saying "Good kitty for stayinog off the counter," and that did the trick.
Now they just come and sit on the floor by the counter and look at me waiting for their pat of butter. (you can't win) -- Carol

See my answer to this on the "Taco in the egg carton" puzzle yesterday. :)

mpp, hilarious...yeah, I may have lost a pound or two chasing Rocky up the stairs, spraying him through the bars all the way...sometimes he got pretty wet...but he always came back, bless him...and most of the time there was no food on the counter, he was just checking it out...Sherry :)))

Sherry - I heard the same about tin foil. After covering several areas with it, it turns out they don't care, but some training was accomplished. I would hear the tip-toeing of sneaky cats on aluminum foil and go running to stop them. Lost five pounds...

Molly, you and I would be having screaming fights with me chasing you with a water bottle...and I thought I had enough problems with Rocky and a small kitchen counter...wouldn't have a prayer with an island counter and trying to keep this one off with trays and bottles...I would end up being the one doing all the screaming...NO CATS ON THE COUNTERS...I was told that if you put cookie sheets on the counters not quite all the way on the counter, the tray would come down and the cat would stop jumping up. What worked was putting anything along the edge of the counter, then he would not jump up, but when after a week, I thought we were done, he would prove me wrong, and it became a life long game (for him, not me). And now, after he's been gone for 2 years, I have no idea where that spray bottle is...Sherry :)))