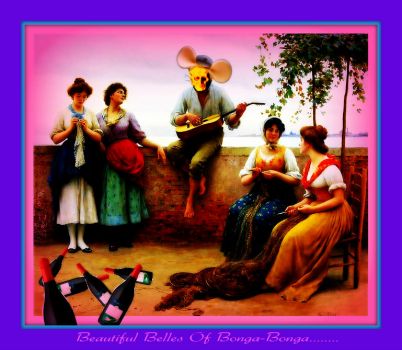 This morning saw me exchange affairs of state for affairs of the heart, as I sauntered down to the
seafront to serenade the beautiful fisherwimmen of Bonga-Bonga.....for today is 'National Fisherwimmen Day"!.......
It all started in 1757, when Lady Hortensia Bugosi's deluded husband set off on his famous search for the mythical (and non-existent) "Giant Tadpole Of The South Seas", never to return........Day after day, week afer week, year after year, Lady Hortensia would sit in the shelter of her potting-shed,
gazing wistfully out to sea, in the hope that her dear husband would return - with or without the fabled Giant Tadpole.......
When Lady Hortensia passed away to the Bugosian boneyard in the skies, it was decided to
commemorate not only her lonely vigil, but also that of the countless fishermen's wives of Bonga-Bonga, and so this day came into being.......
Here is the touching first verse of "Lady Hortensia's Lament"......
Oh Bertie, Bertie, why'd you go
to search for the fabled giant tadpo'?
In South Sea waters no tadpo's grow
and I can only cry "I told you so" ........
Created by lelabugosi Published 17 November 2013
Why this advertisement?

I plead no contest to wanton punning, but if lela can conjure up a puzzle with a French painting in it, I've got a WHOPPER for you!

I believe Bosama lin Aden was a Saudi Arabian, not an Afghani.

These fisherwimmen look like they just got out of high school and don't know diddlysquat about waiting and waiting for days and months and years for their fisher husbands like poor Lady Hortensia...I'm sure no one serenaded her in the potting shed....

I have crocheted a few Afghans but no Afghanis

Well, of course, I should have known that....mea culpa, Hanne.

Ohhh, gglady, I know - I was just joking..... It might have been somebody from the country too, imagine to knit an Afghan person!!! Funny idea...

P_squirt....shame on you for pandering such pitiful puns about your priceless progenitor.....you may find yourself penalized by a punishable stay in POMEGRANETE HELL...."knit an Afghan" indeed.....

What??? They don't like hounds? I know they aren't the smartest of dogs but I'm sure they're very loveable...and very soft...what do they have against Afghans?

Ohhhh is it TADPOLE flawour that's in them? Did you ever think about exporting it so home-wine-makers could put it in their very often very-not-well-tasting wine????

Yeah, I heard, Juneee. It's a time for celebration! And the Fish Slapping Dance!!!

Now I know what she is knitting : a bag ,big enough for all the post Lela could not bring over .... so , she needs another couple of days ( AND NIGTHS )

Yeeees, I think she has come to the trunk!!

maybe it's a pullover for a tree, there are some really pretty ones

Heidi did you hear the Monty Pythons are getting together again, right up your street I think

The Lady on the rigth side , what by the hell is she knitting ??? A Pullover for the ship ???

Yes, I am worry free..I put my tadpole wine on the top shelf with the Drano, bleach and rat poison....

I just worry about this tadpole wine with non-childproof screw tops....when my grandkids say 'hey Granny can we taste your medicine?' I really shudder....as we all know, if they even take one sip they will never be able to have children....

Don't worry, be happy, TomKitty! You are much better off than those who get the corked wine!! Screw tops and plastic corks are better for the wine!!

I'm surprised there was no imbibing of the wine because the corkscrew was missing....every bottle of tadpole wine that has been delivered to me has a screw top and not even a child-proof one either....

I think you guessed it, MustangZally.

Fear not sweet ladies, you won't get blind but you might have a chuckle!!

Lela put in a link for another puzzle, you can see it there!!

can't see a fountain? but it is right there in sight for true believers

Fountain in the town square? What fountain? I don't see no bloody fountain!

Indeed, your way of thinking is grandiose.....

precious-pebble......the Bugosi Fountain Of Youth www.jigidi.com/created.php?id=UDGUPTG8 is a symbolic representation of beauty, and as such stands for all the world to enjoy.......

NO air of mystery surrounds the fountain in the town square...AND for all and sundry to see!

Yes, very nice legs indeed....but I wonder, after 6 bottles (of what is obviously a rare vintage of Tadpole wine ) for four Beautiful, but Not-Mentioned-Buxom, Belles of Bonga-Bonga and the Troubadour himself will he still be able to comport himself with dignity........

I find it quite fascinating that when lela removes his postman's coat...he actually has legs!

Thank you lela for the comment on my comment. I too also found it fascinating when I first read it myself...also...too

I expect Mrs B is glad of a bit of peace and quiet even in this week's theme is music. I hear his finger pickin' ain't really up to scratch and he is tone deaf

Psquirt he probably didn't mention buxom because he assumes we all know he likes to keep abreast of things!!!!

I've been wondering if Mrs. B knows that lela is serenading buxom wenches?

Back to one head, but heating up my branding iron. Toodle-pip to you, too, Oh-soon-to- smell-of-roasted-backside-One.

Ohhh, Juneeee, don't be sorry because you came too late!! But we missed you!!

plus B for bored. What's a hangover like with two heads? I'm always glad to be off to bed before you lot party. I do have work to go to, which reminds me Also my Editor wants to know if you would like to take over the music column, he has had enough of my heavy rock and reggae

That's quite a Liszt of composers you've made there, too-too-awfully.

But lela has left an important alliterative word out of his caption. Instead of "Beautiful Belles of Bonga-Bonga" it should be "Beautiful Buxom Belles of Bonga-Bonga" as these ladies are, one and all, of the bulging, bulky, big, Brobdignagian breastage variety, and I don't mean fat, plump or porky. For lela to choose this bevy of babes to serenade shows more perspicacity on his part than he usually displays. Well, done, lelabug!

Aren't you familiar with quite a lot of bodies?

I am very familiar with Lady Hortensia's body of work.
Lady Hortensia was in some ways an important woman. Her extraordinary and extremely fruitful talent was subjected to the changing influences of the neo-classic and the late romantic school. If the Mendelssohnian model led her to emphasize the formalistic elements in her work, she soon realized that perfect form was only a means and not an end. That emotion, mood, and expression were not to be subordinated to it she learned from Liszt. Hence her works, descriptive in character as their titles imply, show the conflict between form and content which had already become a problem with Berlioz. "Lady Hortensia's Lament", now purely descriptive (a development starting with the pastoral symphony of Beethoven), now dramatic (with Berlioz's Fantastique as the model), are mildly programmistic and colorful, but have neither the sweep of imagination of Berlioz nor the daring brilliance of Liszt.

You might enjoy using my garden. The dogs would enjoy singing along to the cat screeching.

I reallly couldn't get it over my heart to frighten the deer, hares, pheasants and alllll the birds like that! Sorry gemmie, but if Lela doesn't want to come there and serenade, he's so very welcome!!

Perhaps you could invite Roger to your garden for fun and games...wink wink nudge nudge...

You might use my garden not to serenade in!! But I just warn you - it's so wild you might get lost.....

Don't have a garden! So there!

precious-pebble........It would hardly seem proper to serenade a group of conspirators who are conspirationally conspiring to brand a member of the honourable Bugosi family, whether it be in the Ladies' loo, or the outhouse at the bottom of your garden!..........

Those fisherwimmen really can party...hic...oops, sorry...a little leftover? rightover? hungover? from the previous puzzle. Now if you'd brought your guitar to the party, lela we would have invited you into the Ladies' loo!

No need, GGL. The fisherwimmen visited the ''Ladies'' in the previous puzzle and stuffed themselves with chicken wings.

What's that noise I hear?? Is someone torturing a cat?