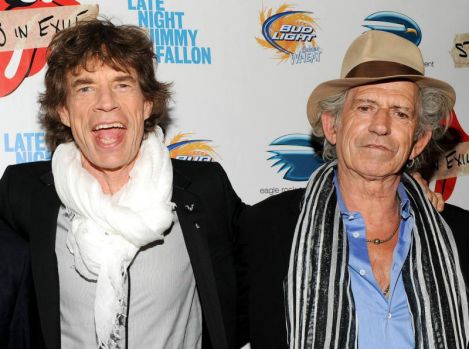 Tribute to Starlord!!
Created by squishy2 Published 7 June 2014
Why this advertisement?

Yes, congratulations like, and Sissel.
And let's not forget that Keith Richards once fell out of a coconut tree, and landed on his head. So this certainly must have helped this songwriting team.

The songwriting partnership of Mick Jagger and Keith Richards, known as Jagger/Richards (and occasionally Richards/Jagger), is a musical collaboration whose output has produced the majority of the catalogue of The Rolling Stones.
In addition to Jagger and Richards's songwriting partnership, they have also produced or co-produced numerous Rolling Stones albums under the pseudonym The Glimmer Twins.

Just about to post a retro puzzle of these guys

I suppose Rolling Beatles is better than Beatle Stones - which would probably involve a surgical procedure...

Morning all! I thought Starlord would appreciate this, as he predicted it would be here!

Sorry MisterDon - forgot my maners - GOOD MORNING to all :-)

Good morning to our Rock Goddess, squishy. That's hardly fair, squish, starting off with this difficult one :-)))

Well, I'm sure they rolled something...