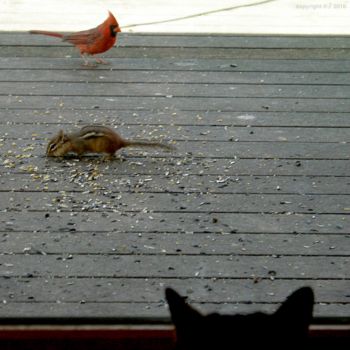 I called this photo "cat food" because the cat thinks so. Actually I'm not sure whether he thinks they're food or just something to play with. In either case, the cardinal is hunting for just the right seed and the chipmunk is stuffing his cheeks while the cat sits on the other side of the glass door.
Created by bluebird42 Published 24 April 2016
Why this advertisement?

LOL, yep, they're the only ones with a giant screen TV and live dramatic presentations.

Thanks Ardy. Hugs back to you.

What a sweet little chippy, Jacki. It looks like it is keeping an eye on the cat. Love it. Thanks, dear friend. I'm about to close down for the night so shall say Night Night. Have a good sleep. ♥HUGS♥

I'm guessing that cat is just wishing he was out there too. Fabulous photo thanks Jacki. I love seeing your dear little chipmunks. hugs.

;-)) Hanne! I think Willy thinks he could catch them if only that invisible barrier were not in his way!

It's my deck, Jacki. I have used it as a sort of garage, putting my car under it when a heavy snow is expected so it'll be out of the way of the snowplow. Or, ;-)) one could call it my neighbor's deck, since it is mostly used by my neighbors, the birds and other sundry critters who come to share the bird seed I put out. In summer they're mostly off eating insects and grubs and things, so I can swab the deck and use it myself.

very cute, jacki. is that your garage roof or a neighbor's lol. thanks.

It's hard to be a cat sometimes and know that you can't make it before they have both disappeared! Thanks Jacki! :-)))

Oh, what he'd give for this moment in the wild outdoors Suzy.

Lunie and Lyndee, My suggestion is
Chippy's saying "I'm sure I can fit a few more in here.", Cardinal's saying, "Um, that one looks tasty, and just a hop away." Willy's saying, "Will they play with me?" or possibly, "That near one will make a good dinner and the red one is dessert."
Actually what they're each thinking might be an amusing topic for conversation.

Thank you K72. I brought the camera out because that was the first day the chipmunk appeared after his long winter nap. The cat and the cardinal were serendipity.

I think we're all wondering just what this cat is thinking!!!

I absolutely love this photo!

Each of them may have different thought...

The ears say it all! A moment in the wild!