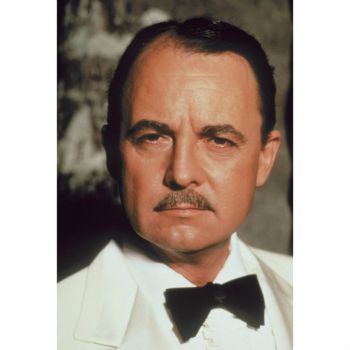 Thalia, that TV program with Tim Hutton, David Wayne as the TV dad, and Mr Hillerman as the arrogant and egotistical Simon Brimmer was "Ellery Queen". It was based on the stories of the same character.

I enjoyed the program and Mr. Hillerman's role.

I was amazed to learn several years ago that he was from Texas, he seemed to speak & act so "British". Pat, that is neat that he even fooled an English Lord! Sad that he is gone now. Thank you for sharing, OMM! :) Gina in Oregon, USA

He was so suave, the smoothest. Thanks for sharing.

Thank you for such a wonderful picture of one of the best actors.

I really liked him and he was wonderful in "Sherlock Holmes" Hutton and his tv dad. He will be missed.

I really liked him .

Oh no, He was wonderful!

He was hilarious as the droll, funereal hotel manager in What's Up Doc?

He was a native Texan. He developed his British accent for Magnum, P.I. by watching and listening to the performances of Laurence Olivier. His accent was so convincing that he once received a fan letter from a British Lord that read, "You are a credit to the Empire."