turned around as leaving cemetary this is what I got 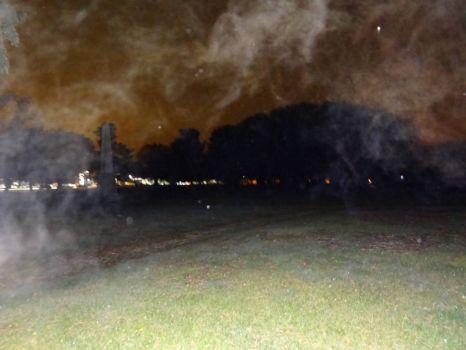 Created by deb5054NY Published 25 October 2012
Why this advertisement?

thanks everyone, I'll reply to all the comments tonight, nice explanation treker
however no one else had any, and none of my other photos had anything like that.
It was humid alright, it was raining, but there was no fog, not even a hint of misty fog, and pictures I snapped right after that showed nothing, it was all very interesting. I love all the thoughts, comments and theories! keep them coming!

Appears to be condensation on your lens (Night air, humidity)

hi gladstone, I was very shocked when I saw it in my camera window, I've never seen anything like that, except for the thousand of orbs in last night's puzzles that were in my yard the morning after the tour!

Very unusual I'm sure it must have been a little unsettling. Thank you for sharing.

maybe you can get it refurbished, but mine was not that bad, I can't afford alot for a camera, but I just love mine, and if I dropped it, I'd get another just like it!

I really hope I don't have to buy another. This one broke the bank. LOL
I will keep it in mind though.

I got a really good deal on mine, from Amazon. keep it in mind if you want to look for another!

I'm sure that is very frustrating CM, I hope you can get it looked at

ok CM, keep me posted. there may be a sensor out of whack, I hope you can get it looked at. I can give you the link to the camera I bought if you are even in the market for another, it is a SONY as well

I will try those thing out. I dropped it really hard on a wood floor last spring. But..... the flash goes off in the house for me. Just not in the dark. Hmmm. If all else fails, I'll call Sony. Thanks for the link.

I just went outside and tried it. The camera does a test flash, but it won't snap a pic. Grrrrrr. The setting is on and it shows that it is on in the window.

It is a Sony a200 DSLR. The flash works with the first shot, then it won't snap after that for some reason. I will have to try it out again. It has happened a lot.

yes CM there should be a place to turn the flash on and off, you may had inadvertantly turned it off, not sure what kind of camera you have but look for a setting with a lightning streak, most cameras have that mark for the flash

hi laurajane, yes it was eerie!

For some reason, when my camera is on automatic, it won't snap in the dark. I wonder if I accidentally changed a setting.

no CM, I did not use a tripod, I was carrying my camera, and just had it on the normal automatic setting with flash, and turned to take one last picture before we went to the next landmark

Nice shot deb! I will have to try it sometime. I always have trouble with settings when taking night pics. Don't know what I am doing. I guess I will have to READ up! LOL Do you have to use a tripod to take night pics?

This is an awesome picture

not my first word morris, but it will suffice for sure!

hi lyndee, wow, doesn't begin to describe my reaction when I saw it, there was nothing around to be seen but some rain. there was no fog, that didn't roll in until later.

Wow Deb, that is really eerie. Glad you turned around as that is a great shot to have missed.

hi loveydear, no, there was no mist, no fog, it wasn't cold no one was smoking, everyone was already ahead of me..I just turned around on a whim to take another picture as we left to go around the corner to a National Landmark, Ft Brown. I was shocked, never expected to see that!

So, was the mist visible to the naked eye?