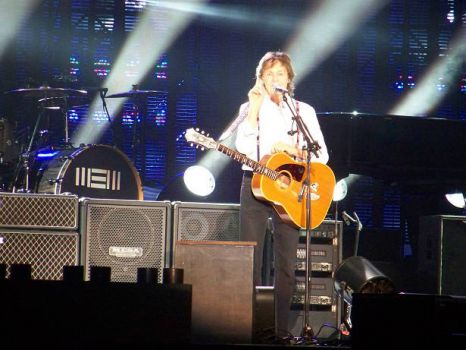 Paul McCartney performed in San Diego at Petco (Baseball) Park. It was his first public performance in San Diego since 1976 and it was great.

It was a special treat for my wife and I.

I can make bigger versions if desired (let me know the general range # of pieces you'd like).

Glad to beatlecarol. I'll post more new puzzles. Also check out TenStar (and possibly TenStar2) for a string of additional pictures. I got a 10 star so I'll fill it in with some nice filler images.

I took a lot of pictures hoping some would be good. Nearly 200 are good enough to keep plus about 7 little video clips like "Hey Jude" with sooo many phone lights on.

Some pictures are of the park's seats from the baseball field - we fans don't get to get onto the field unless we want to get tackled and arrested - something I generally try to avoid :-).

It was way cool getting to see the park from the field. It was also a neat surprise when Paul had different areas of the stands get loud. I can imagine a bit what players hear on great plays - the sounds really come onto the field.

Make that 11 that you know of, I just got around to solving. If you have pix, share!

10 Stars!? That's way cool. I didn't even think of that happening. I just thought I'd check the comments and noticed it.

Thanks for the great surprise All-Stars! :-)

Nice puzzle but I've never really been over the moon with Paul McCartney. Apologies Sir Paul and his fans, but he's just not my cup of tea ....

Size 30 puzz is about right for me Like, thanks. Nice treat :o))

Paul looks great, like92115. Thanks for posting the photo!

Thanks for commenting beatlecarol - yes it is amazing he can still sing for 3 hours.

And yes, he sure gets around - I guess he found a car for his driver ;-)

He sure gets around. I know he was in Paris last week. (So was I but I didn't see him.)
I saw him in 2002 in Portland and in Kansas City 9/17/64. Amazing he can still sing 3 hours straight.
Last week I toured his childhood home in Liverpool. And John's. My bucket list trip.