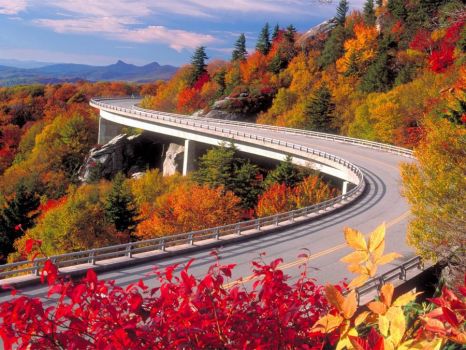 Created by ruglady1 Published 15 September 2010
Why this advertisement?

I'm very happy with the number of people who do my puzzles; the number's much higher than I ever hoped for.

And 7th too. I did this long, long ago but I was no longer credited with a solve, so I did it again. I expected to automatically be on the Leaderboard because there are only seven names up there. Instead the system shows me under a double line with the notation
Your time 15:17
Strange, eh?

Beautiful scenery! That must be some drive. Thanks for the puzzle, ruglady. :D

it took me 46 minutes to solve this puzzle. i hope some of the people doing it in 5 minutes had
fewer peices than i did

I live in NC and have driven this area many times. It is breathtaking especially in the fall. Haney :-)

It is a puzzlement, puzzlegirl, a puzzle that's puzzling! (I had no idea it had this many solves, although there is one with over 1,500,000 solves on Jigidi. A bunch of windblown frozen water.)

It is very popular and completed by guests. I've got the top two scores on the leaderboard but the fastest time is under 3 minutes by a guest. It has been circulated in social media and people attempt it without logging onto jigi

Such a relaxing puzzle to do. Won't be long till the trees will be wearing these autumnal hues once again. For some strange, unknown reason, this puzzle appeared on my laptop tonight (9/12/17). Looks like you were the last to solve it, Patsquire, over a year ago. I'm confused by it all. It says 150,602 solves? Mary

In May 2011 I got a link (without a picture) from somebody in an email. It said, if you like jigsaw puzzles try this. It happened to be my favorite kind of puzzle, beautiful fall foliage. So I did and today, over 5 years later, I just solved my 12,000th puzzle!

getting better - finished in just under half an hour. Lots of fun and such a beautiful puzzle.

Iv'e never seen any landscape so breathtaking.....tnx so much for sharing.

42334jth another approach is to minimize the "completed" portion and look for the missing pieces.

42334jth Try grabbing the "completed" portion and move it all around , meanwhile looking for the
missing pieces.

This is the Linville Gorge Viaduct (name?) on Blue Ridge Parkway in NC. If you get a chance, stop at the rest area/office and see models depicting its construction..an engineering masterpiece. Thanks ruglady1.

Please stop changeing things, its hard enough for older folks to keepup with modern tech. without the constant re-jigging. Thanks for your help

Near where I grew up. Gorgeous memories.

P.S. This is the very first time I have attempted to solve a puzzle with over 60 pieces. It took me 30 minutes, but it was worth it!

It's just amazing. God really does love to paint! Thank you so much for giving those of us living in barren country the opportunity to feast our eyes!

This is one of the most heart warming and colorful landscapes I have ever enjoyed. Sometimes a picture comes along unexspectingly that touches your soul and this is one of them and right hear in America. Lucky you for seeing it for real and many thanks for shareing it with us.God Bless, Doc5

Beautiful, thank you for sharing

I have been on the Linville Gorge Viaduct. My parents lived not far from there after they retired. I also posted a picture of this in a different season. Nice fall picture, Sharen.

Like all the puzzle, but, have had a piece missing for the last three puzzles I've made. How does that happen?

got to the love them smokey mountains we will miss the colorful drive this year. no vacation for us. love you mom and dad in bryson city

One of my favorite photo ops on the parkway! Thanks for sharing!

That is so gorgeous it almost doesn't look real!