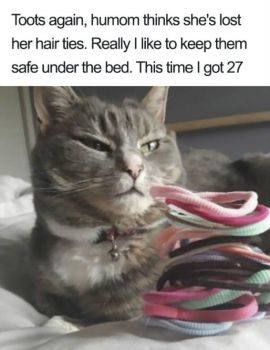 Wendy, I have two things that may help you and the cat: first, feed her small, frequent meals and if she continues to vomit try a different food. Second, have you tried the cardboard horizontal "scratching posts"? Cats take to them easily, they are not expensive and they remove the need to cut cat's nails.

Thanks youngone, those are both great videos. It really doesn't take much to to keep a cat entertained. Now I have to go and clean up "upchuck" from my JJ cat. She has been like this since the day I got her. She eats, maybe she overeats, then she throws it up, then has to eat again because she has nothing in her stomach!!!! But she doesn't seem sick. I don't get it. And to catch her to take her to the vet is almost impossible, I can't hardly catch her to cut her nails...........Wendy

Watch the first video below that morepieces posted, Wendy.

I have a whole container of these that we purchased specifically for our big Scrappy cat. My late hubby used to shot them down the hallway and Scrappy would chase them, and on occasion, bring one back...............Wendy

Tie a knot in them and use them for dog or cat toys, Sherry.

well, they're managing by having made friends with the other misfits in the drawer...and a couple of times they agreed to go out with another one of them (as close a match as possible) when all the other socks were in the wash...Sherry :)))

Now that is sad. Are they lonely without their mates? :))

No, the dryer eats the socks, have at least six with no pairs...Sherry :)))

Have them too. No missing socks or anything else for that matter. :)

Lol - the cat must be dusting, the scrunchies look dust free. Good thing, as humon apparently doesn't. :) I have platform beds - two less places for things to be hidden.

"What the heck does one woman need with 27 hair ties?" To replace what the cat took!! I've mentioned this before, if we're talking Scruncis, when I gave a home to a cat living at the vet's office, they sent his toys, too, a ball, a stuffed toy and a Scrunci. That was his favorite and he roped the other cats into the game. Keeps them busy for hours. The only drawback is when you move the couch to vacuum, there are at least 27 under it...

Seems that, like me, humom doesn't get the vacuum under the bed often enough (at least in the corners). That has a lot to do with why my hair ties live in the bathroom, under cover.
Sherry, I love your explanation!! ;o)))

I'm surprised I got it all out the first time... and really surprised I was able to dream up so much... Sherry :)))

Could you repeat that? :)

1. They stretch out with use and are harder to hold onto the hair, so you buy new ones to replace the stretched out ones, but you can still use the old ones with the new ones.
2. One or two will be used at the same time for a tighter grip.
3. Colours to match outfits...one, two or three can be used at the same time to add attractiveness to the outfit.
4. You buy them in multiples and they do get lost (or stolen, it appears), so when you first buy them, it appears you have many and then you lose some and replace them and then you find all the lost ones in various places and since you have replaced the lost ones, it appears you have many again.
...Sherry :)))

What the heck does one woman need with 27 hair ties? :)

Methings she found out, n'est ce pas? Funny what they collect... Sherry :)))