What predator do you see in this photo? Check comments later for clue if needed. 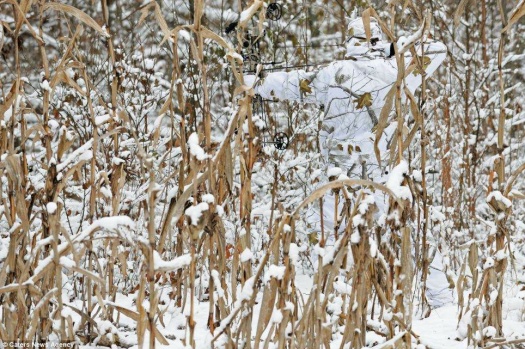 Created by marion196 Published 2 July 2022
Why this advertisement?

One of the most dangerous predators on the pkanet :-((

The round metal thing (one at each end of bow) is a cam. When you are pulling back, it can take a lot of strength, until you reach a certain point. The cams help by taking some of the pull pressure off of you. I used to shoot a compound bow, but only for target practice. Just something I wanted to accomplish.

That is a compound bow, the wheels at either end of the bow act like cams and increase the force on the arrow, for example a 70 pound draw weight would only feel something like 40 pounds but would accelerate the arrow faster than a 40 pound bow would.

I found him by focusing on the first black object toward the bottom of the screen. Then while slowly scanning the puzzle I was able to see the hunter. It at first looks like white patches but if you keep looking at the area the human comes into focus. Thanks for this puzzle.

Yes, folks...it's a hunter with a bow and I think the round metal thing is attached to the bow for some reason...like a scope or something. No animals in the picture. Good job, everyone.

Wondering about the black metal whatever. Looks like maybe sound sensitive to pick up creatures coming in range? I can't actually get my eyes on the hunter but I can sense he's there. Thanks, Marion.

A deadly beast -- the dastardly human.

Yup, one of those sneaky human hunters again

A Human Hunter is the predator I see.