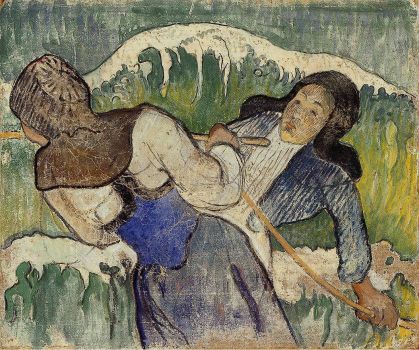 "Paul Gauguin styled himself and his art as "savage." Although he began his artistic career with the Impressionists in Paris, during the late 1880s he fled farther and farther from urban civilization in search of an edenic paradise where he could create pure, "primitive" art. Yet his self-imposed exile to the South Seas was not so much an escape from Paris as a bid to become the new leader of the Parisian avant-garde. Gauguin cultivated and inhabited a dual image of himself as, on the one hand, a wolfish wild man and on the other, a sensitive martyr for art. His notoriety helped to promote his astonishing work, which freed color from mimetic representation and distorted form for expressive purposes. Gauguin pioneered the Symbolist art movement in France and set the stage for Fauvism and Expressionism."

How wonderful to hear his thoughts! And yes, the Japanese resemblance is striking.

Thank you Maggie and Andy. I read the entire letter and just that bit of reading helps me see Gauguin's thinking. ...even enjoyed the sign off:

I shake your hand cordially. Ever yours, P. Gauguin.

Wow. I guess we're all winners then, learning this bit of insight about Gauguin and his thoughts and feelings, shared with Van Gogh no less! I'm really taken with his deeply descriptive phrase "Seeing this every day I get a kind of gust of wind for life, of sadness and obedience to unfortunate laws." Hopefully there's nothing lost or gained in translation there, but I think not as I really get a sense of what he meant. Like his painting, the writing is so descriptive and rife with emotion. I found the entire letter - thanks for getting me started Maggie - and more at the letters section of the Van Gogh Museum site: http://vangoghletters.org/vg/letters/let828/letter.html. I've never perused a collection of letters before. Maybe it's time to start...

The things you learn in the Bommom School of Art Appreciation! I'm signing up for another semester.

What great comments these are! I just love it when the discussion evolves. At times I'll stand back from jumping in with comments, just to see where things go. I've looked more carefully at this painting because of you all. Nice! Thank you!!

HuguetteO, Thank you and Merry Christmas to you, too! :-)

Okay, I'll turn from silly to serious. :-) Really good call on the Japanese flavor or influence, Andy. Gauguin has even given the woman facing us the features and very black hair of an anglicized Japanese person. And applause to you as well, Maggie, for tracking down that information which substantiates Andy's observation!

Andy - you are our winner today! A letter from Paul Gauguin to Vincent van Gogh in 1889 includes:

"At the moment I’m doing a no. 50 canvas, of women gathering wrack at the sea’s edge. They’re like boxes stacked up here and there, blue clothing and black coifs and this despite the bitterness of the cold. Manure which they gather to fertilize their land, red-brown ochre with ruddy highlights. Pink sands, not yellow, because of the damp probably – dark sea. Seeing this every day I get a kind of gust of wind for life, of sadness and obedience to unfortunate laws. I try to put this gust of wind on canvas, not haphazardly but rationally, perhaps exaggerating a certain rigidity of pose, certain sombre colours etc... All of this is mannered perhaps, but where’s the natural in a painting? Everything in paintings since the most distant ages has been completely conventional, deliberate throughout and very far from the natural, consequently very mannered. You’ll say that they, the ancient masters, have genius. That’s true, and we don’t have it, but that’s no reason not to proceed like them. To a Japanese person what we do is mannered and vice versa; this comes from the fact that there’s a notable distance between the two in vision, customs and types. So if a man sees, feels, thinks differently from the mass because of race, temperament or other cause, he is unnatural and consequently mannered. "

Thank you Gayle - I didn't know of this painting!

You've got me on that one, Andy. I'd have to do some research... They look like they are each handling long rakes or whatever and the work is probably tiresome. Gauguin's "distorted form for expressive purposes" probably makes them look joined at the hip, Bill.

Here's a discussion of modern kelp gathering, but scroll down to see an older illustration.
http://gastropod.com/kale-sea/

Is the woman on the left leaning back, pulling on a handle or rod to which the rope is attached. The other woman seems to be helping to pull or guide it towards the woman with her back to us. They're probably not having fun. My guess this is on the west coast of France, right on the Atlantic, maybe Brittany? What really strikes me about the painting, especially the waves, is that seems so Japanese is style. Very reminiscent of some of the Japanese works that you've posted in the past Gayle. Was Gauguin influenced by Japanese artists?

It makes no sense to me either, Bill. They're collecting seaweed, for heaven's sake, not trying catch butterflies. What are they doing with whatever they have in their hands which, I presume, are some sort of rake? Oh, I know! They're having a brawl! The one with her back to us just got smacked by the other one with her rake. Ouch. Meanwhile, they're oblivious to the tsunami behind them.

Doesn't it look like they are about to be in serious trouble?