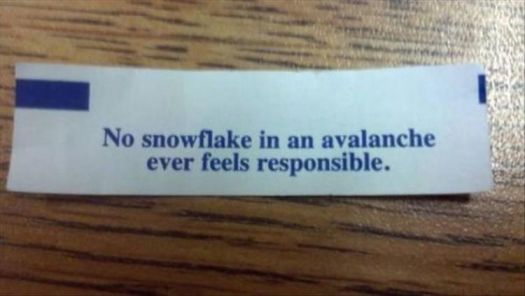 mpp, as a survivalist, I recommend you always have a beer close at hand, just for these kind of emergencies

mpp, you should really take it easy.

I just came in from yardwork, hot and dripping. Thank you all so much for the laughter. You are collectively, and perhaps individually, crazy.

It snowed here today, should I be angry?

How does she cheat? Are you in different counties or something? :)

They... they wrote that for you. Sorry, don't mean to be 'that guy', just in a mood. Been playing "Count the FedEx trucks" with my neighbor. She cheats - totally irresponsible... like those jerk snowflakes.

Yes, he wrote that for me.

Humble in the jumble? Is that Jethro Tull I hear in the background?

"Walking through forests of palm tree apartments
Scoff at the sloths who live in their dark tents
Down by the Jigidi
Drunk every Friday
Fondling their nuts
Saving their real nuts for Sunday.
Mischkas and mpps
Who wait in the barrio
They're fast but they're crazy, and sleep in their shadows..."

TIM is in peril of changing that. He is obviously manipulating figures to show what he wants to see (you should be ashamed of yourself, there are women present).

I am way to humble to need a cure for humbleness. Being humble in the jumble of the jungle, can be lifesaving.

It's so good to come here, get away from the fake news, and deal with pure solid FACTS for once.

sloth, you are confused (again). The outhouse on the edges of cliffs were placed there by the FDA, (not the DHS)... the FDA was using sloths while performing clinical trials of a new drug to cure humbleness. Their cure for humbleness will be available to the public in the spring of 2068... until then, the FDA suggests to keep using the "push off a steep cliff" method of curing humbleness

TIM. THAT is a vicious rumor started by small ponies and spacemen. I have never peed on the top of a snowfield. What kind of a moron would? As far as outhouses go, those provided by the DHS, were placed on the edges of cliffs, and under loose boulders. I lost several family members to those awful ponies and spacemen who would push the outhouse over the cliff whilst occupied, or bury it under a rockslide. I myself, have only used the porta pottys at concerts and such. Otherwise, I prefer my heated, massaging, musical, lighted commode at home.

Gravity controls weren't invented until 2027... up until then all avalanches were caused by sloths peeing on the snow covered mountaintops. In an attempt to prevent future avalanches, DHS provided outhouses for the sloths, but the sloths never figured out how to flush an outhouse.

... except for the one snowflake who kept dicking around with the gravity controls.

Love the puzzle, and the "discussion" below!

Ok, I generally do not enjoy being called a jerk, but if you say it is good, I am very pleased with that.

No it is a compliment. Your bantering with others is commendable At least you don’t use abusive language

Thank you, I think.

Hoff you remind me of some management jerks i once knew

Have you ever asked one?

It's a snowflake - they don't have feelings...